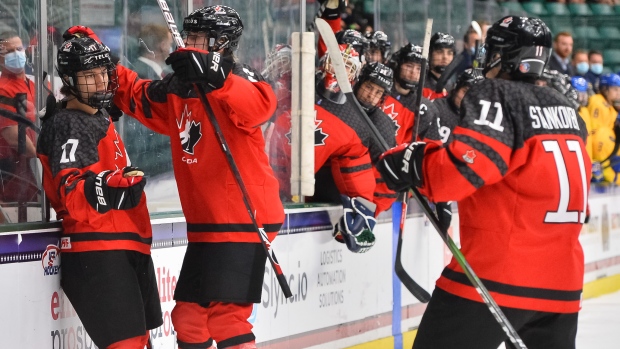 FRISCO, Texas — Canada will play for gold at the under-18 men's hockey championship.

Connor Bedard had a hat trick while captain Shane Wright added a goal and three assists, and the Canadians toppled Sweden 8-1 on Wednesday in the tournament semifinals.

"Before the game, we told our players to expect a tough game from the Swedes," said head coach Dave Barr.

"We had the mindset going into the game that things were not going to be easy, and offensive production and opportunities were not going to come easy. That was our messaging going into the third period as well, we just needed to keep doing the little things right and we knew the opportunities would come. We got that third goal early and things started to open up from there."

Canada will face Russia in Thursday's gold-medal game. The Russians edged Finland 6-5 in the other semifinal.

Bedard — the first player ever to be granted exceptional player status for the Western Hockey League, allowing him to enter underage as a 15-year-old this year with the Regina Pats — has eight points in his past two games after producing two goals and three assists in a 10-3 quarterfinal victory over the Czech Republic.

"I do not think I was playing too great in the preliminary round and I was a little bit frustrated with my game. My legs feel a lot better than they did for the first three or four games where I was pretty tired, but I have been able to gain some confidence after a few goals," said Bedard.

"It is always good for the confidence when you are scoring and helping the team, but we also have been winning all our games and have a lot of confidence as a team. If we can bring that into tomorrow’s game, I think we have a good chance of winning."

Chase Stillman, Brennan Othmann, Francesco Pinelli and Conner Roulette rounded out the scoring for Canada, which downed the Swedes 12-1 in the round-robin portion of the tournament.

Benjamin Gaudreau made 16 saves for the win.

Isak Rosen replied for Sweden, the defending champion at the event. Carl Lindbom stopped 48-of-56 shots in defeat.

The Canadians have won the tournament three times, with their last gold medal coming in 2013.

This report by The Canadian Press was first published May 5, 2021.