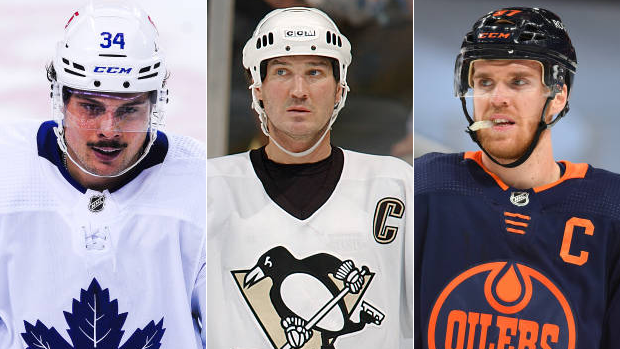 Hockey’s new 3M Company is a conglomerate of super-scorers: Mario, McDavid and Matthews.

Mario Lemieux has emerged from the history books to act as a measuring stick for the NHL’s current two most prodigious talents.

Between them, they are making a mockery of NHL scoring standards: McDavid has 27 points in his last 11 games and Matthews has 18 goals in his last 18 games.

With 91 points in 50 games, McDavid has six games to score nine points and become the first player since Lemieux and Jaromir Jagr in 1995-96 to reach the 100-point mark in 56 of fewer games.

With 39 goals in 48 games, Matthews has the Leafs’ remaining four games to reach the 40-goal mark.

McDavid scored twice, including an empty-netter, and assisted on two more goals Monday in a win over Vancouver.

Meanwhile, Matthews extended his latest goal streak to four games with one goal in an overtime loss to Montreal.

McDavid is in the midst of a stretch of utter team scoring dominance.

With four points on five Oiler goals versus Vancouver, McDavid has earned points on 27 of Edmonton’s last 36 goals over 11 games. That represents a hand in 75 per cent of Oiler goals during that span.

That trails only Lemieux during the NHL’s Modern Era (since 1943-44) for highest percentage of points vis-à-vis team goals in games the player appeared, according to Randy Robles of Elias Sports. 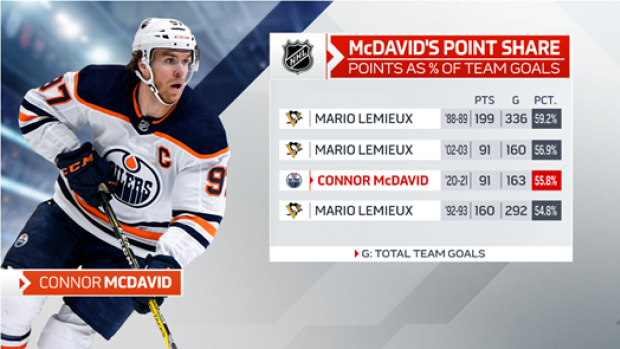 Not surprisingly, Lemieux is also the standard-bearer for goal-scoring productivity from recent times.

But over the past 25 seasons, only Lemieux has approached goal-per-game status and that was in 1995-96, the highest-scoring season of the past quarter-century with teams averaging 6.28 goals per game.

The Leaf centre, Lemieux and Alex Ovechkin are the only four players to reach 0.79 or better the past 25 seasons.

Matthews is scoring at a 67-goal full season pace, the highest since Ovechkin scored 65 goals in 2007-08. 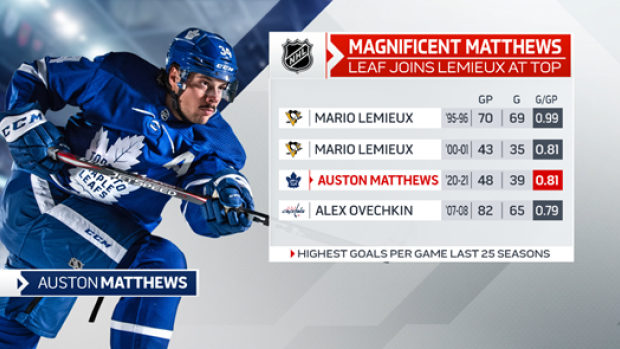