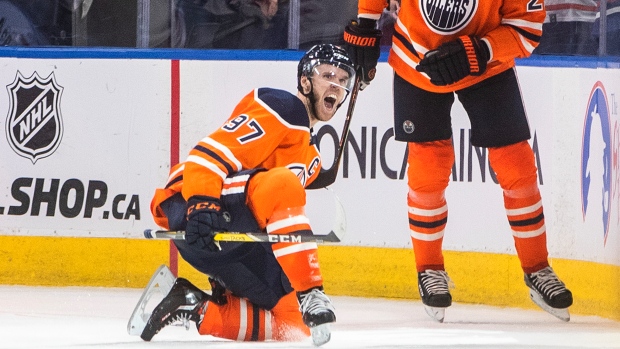 Bobby Clarke famously said of Bobby Orr that the only reason the all-time Boston Bruins’ game-changer played in the NHL was because there was no higher league for him.

There are times, many, many times, the same can be said of Connor McDavid.

Because like Orr before him, McDavid represents the peak of human achievement in his sport in his time.

And like Orr before him, McDavid plays in the NHL (No Higher League) because there is no alternative.

“They’re both one league higher than what the rest of us played at,” Clarke said.

McDavid, a half-century removed from Orr’s landmark 102-assist, 139-point 1970-71 season, is quite simply the most highly evolved hockey player ever.

That doesn’t mean the Edmonton Oilers centre is always the best player in today’s game – sometimes not even on his own team – but it does mean he is always the greatest.

McDavid had a 2021 calendar year for the ages, setting almost incomprehensible standards.

No. 97 was only the second unanimous selection for the Hart Trophy in the award’s coincidental 97-year history, receiving all 100 first-place votes. Wayne Gretzky, The Great One, earned a similar honour after scoring a league-record 92 goals and 212 points in 1981-82.

Nothing speaks to McDavid’s magnificence more than the speed at which he plays and processes the game.

“McDavid is just flying right from the start…and everything is done at top speed,” said Clarke. “Not many people can have a head like that with all those other skills. If anything, he gets better the faster he goes.”

Bowman said, “I guess he’s as fast a player as I’ve seen, it’s hard to believe his acceleration and his footwork. Working his hands and his feet at the same time with his head. That’s not easy to do.”

McDavid is annually the leader in NHL end-to-end rushes but doesn’t necessarily need all three zones to gather speed. His acceleration is legendary and the principal point of difference between McDavid and his contemporaries.

“He uses linear crossover which is a unique and new age way of skating to confuse defenders and offer up more offensive options,” said TSN’s Mike Johnson. “But when it comes to skating, what really sets him apart is not so much his top speed, which is crazy fast, but how quickly he can get there compared to the rest of the league. That's where he is in a class of his own.”

McDavid is not skating away with the scoring title this season – he’s tied with teammate Leon Draisaitl at the Christmas break – but the 25-year-old is skating away from and through the opposition as only he can.

He has given new meaning to the term odd-man rushes this season, scoring against the New York Rangers and Winnipeg Jets on plays that rank in his personal canon of sensational goals.

All by himself, McDavid outnumbered a quorum of Rangers Nov. 5, stickhandling through four defenders before scoring on goalie Alexander Georgiev.

Two weeks later, on Nov. 18, he sped through three Jets before scoring on Connor Hellebuyck.

Soon after, Sidney Crosby had this to say about McDavid:

"He's playing at such a high level, and when someone is playing at the level that he's at, it's hard to think that they can find another level," said Crosby. "I think he's done that. I think that's the most impressive part about it."

McDavid scored 55 more regular-season points in 2021 than every player in the NHL – except Draisaitl, whom he outpointed by 21.

McDavid is the definitive choice for NHL calendar player of the year, but he’s not the only candidate. At least four others deserve special mention:

- Draisaitl: Overshadowed by McDavid but not overwhelmed, the Oilers centre is tied for the 2021-22 NHL scoring lead with his teammate after starting the season with 20 goals in 20 games, becoming the seventh different player in league history to do so and the first since Lemieux in 1995-96.

- Alex Ovechkin: The Washington captain continues what appears to be an inexorable climb to No. 1 all-time in goals. Ovechkin scored 46 goals last season and with 22 this season, the 36-year-old is on pace to become the oldest 50-goal scorer in league history.

- Auston Matthews: Nobody in hockey, not Ovechkin, not Draisaitl, is as sure a thing to score as the Toronto centre. Matthews leads the calendar year in goals (61) and in games with goals (45 of 79), scoring in an amazing 57 per cent of games.

- Andrei Vasilevskiy: The Tampa Bay stopper has won a record 64 combined regular-season and playoffs games in 2021, the most by a goalie in a calendar year, surpassing Marc-Andre Fleury’s 62 in 2009. Vasilevskiy’s win total is three times as high as his loss total, 21, in 2021.