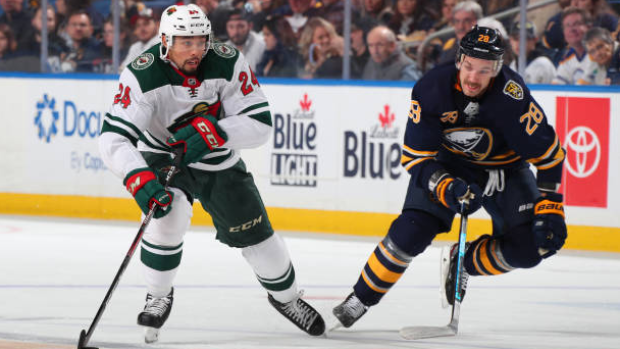 Buffalo Sabres general manager Jason Botterill is looking to add his team for a playoff push.

The Sabres have already brought in Michael Frolik from the Calgary Flames on Jan. 2 and Botterill told WGR 550 in Buffalo that there are no plans to wait until the trade deadline to try to strike again.

"We want to make trades. We're looking to add to our group," Botterill said earlier this week. "I don't think we've been hit from that situation, even all the way back to November.  People ask, 'are you waiting until the trade deadline for these type of deals?' No. We're open to trying to find something that can certainly add to our group, but it hasn't materialized. We'll continue to look at it, and there's no use to saying that we're close on a trade or this and that. Until it actually happens and we announce something, it's just talk. That's what we're trying to perceive with some things. It hasn't materialized, but we'll continue to look."

The Sabres are five points back of the Columbus Blue Jackets for the final wild-card spot in the Eastern Conference and Botterill said he expects the team to make a playoff push down the stretch.

"Some teams are going to get hot, and you've seen it throughout the league," Botterill said. "What our focus has to be is how we play, how we're doing against other teams here. I know Ralph [Krueger] has mentioned a lot about winning two out of three games here and trying to minimize things. You can't always look at the big picture. I think our group has excelled when it's tried to stay in the small picture. Our focus here now is on the next few games here, see where it goes from the break, and then materialize from there.

"We haven't had the production yet. We haven't had the results yet. We still have to improve. One hundred per cent. We're not an elite team by any means. Should we be in a conversation for playoffs? Yeah, I think we certainly should be in that conversation. We can continue to talk about it, but we have to go out there and actually have the results."

The Minnesota Wild are shaping up sellers ahead of the trade deadline as they sit seven points back of the Edmonton Oilers for the final wild-card spot in the Western Conference.

According to TSN Hockey Insider Darren Dreger, Wild general manager Bill Guerin may be willing to part with a significant piece on his blueline before Feb. 24.

"I’m told that Bill Guerin is open for business and part of the trade bait list could include veteran defenceman Mathew Dumba," Dreger said on Thursday's edition of Insider Trading.

Countdown to TradeCentre on TSN Radio

TSN Hockey Insider Bob McKenzie notes the Chicago Blackhawks face a tough decision on how to proceed in goal, with both Corey Crawford and Robin Lehner slated for unrestricted free agency this summer.

Lehner has a 14-7-4 record this season with a .923 save percentage and a 2.85 goals-against average. McKenzie added that the 28-year-old is not expected to take a discount this summer after signing a one-year, $5 million deal in July following his breakout season with the Blackhawks.

Should the Blackhawks, who have surged to within five points of a playoff spot, elect to move Lehner, TSN Hockey Insider Pierre LeBrun believes the Carolina Hurricanes could be in pursuit.

"If and when Robin Lehner becomes available by the way, keep an eye on Carolina," LeBrun said. "They tried to sign him last summer and I think they’d like to add more insurance in goal. That’s a guy they have on their list."