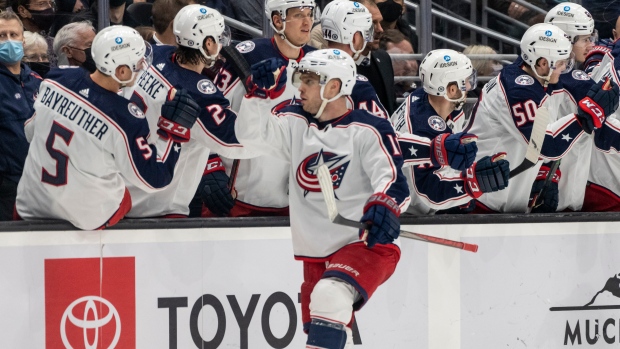 The NHL's Mar. 21 Trade Deadline is approaching and teams are making decisions on whether to buy, sell and decide which players can make the biggest difference and hold the greatest value. Check out today's trade rumours and speculation from around the NHL beat.

The Columbus Blue Jackets appear destined to miss the playoffs for the second straight season as they enter play Sunday 13 points out of a wild card spot. They haven’t exactly looked like they’re on the verge of making a run either, going 2-4-4 in their last 10, and currently sit fifth in the Metropolitan Division at 29-27-3.

According to The Athletic’s Aaron Portzline, the best read on the Blue Jackets heading into the March 21 trade deadline is that general manager Jarmo Kekalainen projects to be a moderate seller. They’re expected to listen to offers on just about anybody, but aren’t likely to break up the leadership group or core of the franchise, making it a “stay-the-course deadline,” Portzline writes. So it looks like we may not get that Patrik Laine trade after all.

According to Portzline, three players who could move are forward Max Domi, defenceman Dean Kukan and goaltender Joonas Korpisalo.

Portzline writes that Domi could be a second or third-line winger on a playoff team and is Columbus’ biggest available trade chip. A pending unrestricted free agent this summer, there have been no talks about an extension. The 27-year-old currently has nine goals and 20 assists in 49 games this season, his second with the Blue Jackets.

Kukan, 28, is also a pending UFA and while he might not generate a huge return, Portzline argues that playoff teams are always looking for depth on the back end.

And then there’s Korpisalo, who has struggled this season to a 3.95 goals-against average and .883 save percentage. While no team seriously looking for goaltending help is likely to consider him the primary answer, Portzline notes he could be looked at as a third-string insurance policy for a team heading into the postseason. Like Domi and Kukan, the 27-year-old netminder is also a pending UFA at the end of the season.

Karel Vejmelka has shown flashes in his rookie year with the Arizona Coyotes this season, posting a .905 save percentage and a 3.37 GAA in 34 games.

According to TSN Hockey Insider Darren Dreger, the possibilities for the 25-year-old are intriguing. He is set to become a restricted free agent after the season but Dreger questions if he’s more likely to be dealt than extended.

Vejmelka possibilities are intriguing. Is trade more likely than extension? Offer sheets are rare, but at $3 mil you give up a 2nd round pick for a quality goalie in the summer. May not get there, but has to be on the list of options. https://t.co/6ILz6fRbFd

“Is trade more likely than extension? Offer sheets are rare, but at $3 million you give up a 2nd round pick for a quality goalie in the summer. May not get there, but has to be on the list of options.”

The Trebic, Czechia native was selected in the fifth round (No. 145 overall) in the 2015 NHL Draft.