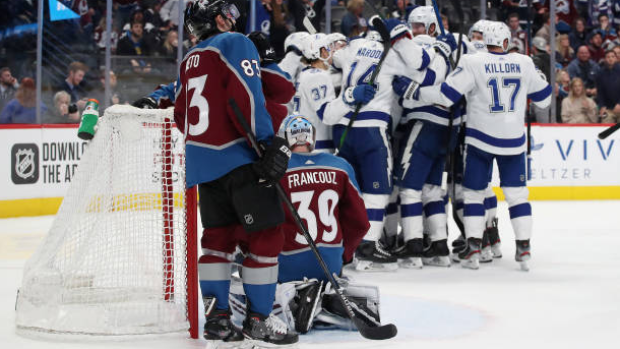 Kiszla adds that with injuries piling up at forward - the latest being Mikko Rantanen ruled out "for weeks" on Monday night, general manager Joe Sakic may be forced into acquiring offensive help for his team. Looking at the Canadiens, he believes Tomas Tatar would bring a boost to the Avalanche lineup, but isn't sure that Sakic would be willing to give up the pieces necessary to acquire him.

Tatar is signed through next season at a $4.8 million cap hit. He has 21 goals and is on pace for a career-high in points this season with 53 through 61 games. The 29-year-old was traded by the Red Wings to the Vegas Golden Knights at the 2018 trade deadline for a first-, second-, and third-round picks before being flipped to Canadiens seven months in the Max Pacioretty trade.

With forwards Nazem Kadri and Matt Calvert sidelined in addition to Rantanen, Kiszla suggests Sakic could also contact the Detroit Red Wings about a less costly piece like Luke Glendening or Darren Helm to help the Avs' push.

Glendening, 30, has six goals and nine points in 50 games with the Red Wings this season. He's signed through next season at a $1.8 million cap hit.

Helm carries a larger $3.85 million cap hit through next season and has nine goals and 15 points in 58 games this season. The 33-year-old has spent his entire career with the Red Wings, who drafted him in the fifth round of the 2005 NHL Draft.

The Avs currently sit third in the Central Division but are just one point back of the St. Louis Blues for first place with a game in hand.

Bruce Garrioch of Postmedia writes there's a sense that the Ottawa Senators aren't in the same ballpark as Dylan DeMelo when it comes to contract talks, and it appears the defenceman will soon be moved ahead of the deadline.

Garrioch points to the Calgary Flames, Tampa Bay Lightning, Winnipeg Jets and Vegas Golden Knights as interested parties and believes the Senators could likely expect a similar return to the second-round pick the New Jersey Devils got for Andy Greene this past weekend.

UPDATE: DeMelo was traded Tuesday to the Winnipeg Jets for a 2020 third-round pick.

As for centre Jean-Gabriel Pageau, Garrioch reports that the Senators are expected to take a run at signing the 27-year-old this week before making their final decision on whether to move. While some have speculated that the Senators could receive a first-round pick back for Pageau, Garrioch sees that as unlikely. With the Senators already owning three second-round picks this June, he wonders if the team could hold on to Pageau and reassess the situation before July 1.

According to Joe Haggerty of NBC Sports Boston, the Boston Bruins are "very much interested" in Columbus Blue Jackets winger Josh Anderson ahead of the deadline.

Haggerty notes, however, that the team intends to make an aggressive pitch to the New York Rangers for Chris Kreider before Feb. 24, pointing to Anderson as a contingency plan with many teams expected to pursue Kreider.

Anderson is a restricted free agent this summer and has shown strong potential in the past (27 goals and 47 points in 82 games last year) and Haggerty adds the asking price for the Bruins will be high. Haggerty believes the Blue Jackets can expect a similar return to what the New Jersey Devils got for Blake Coleman on Sunday in an Anderson trade. From the Bruins, he believes that would be a first-round pick and defensive prospect Urho Vaakanainen.

In 26 games prior to the injury this season, Anderson had just one goal and four points, but Haggerty notes he possess a similar skill set to Kreider when healthy which makes him appealing to the Bruins.

Anderson's name has come up in trade speculation throughout the past month, with Larry Brooks of the New York Post suggesting that the Blue Jackets could include him in their offer to the Rangers for Kreider.

Listed at No. 26 on the Trade Bait board, Anderson carries a cap hit of $1.85 million this season.