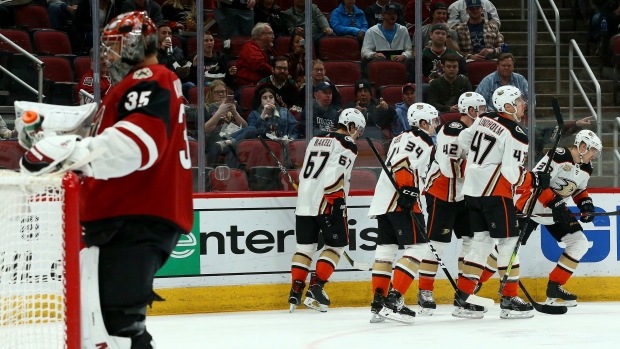 The Arizona Coyotes' six-game win streak was snapped Tuesday night in a 3-1 loss to the Anaheim Ducks and Coyotes head coach Rick Tocchet summed up his team's performance in one word.

“Garbage,” Tocchet said, per the Arizona Republic. “I liked our first and we had some chances and [Ducks goaltender Ryan Miller] played well, but other than that it was garbage to be honest with you. We’re not going to win them all and we like what’s been going on here, but our second and third periods were not good. We needed more out of some guys.

“We didn’t get energy from some guys that are going to have to play if we’re going anywhere. We need these guys to go and I didn’t see much urgency from them.”

The Coyotes were outshot 31-23 on the night, but it was the team’s inability to score on a long 5-on-3 power play in the first period that left Tocchet lamenting what could have been.

“We had a couple shots on the 5-on-3 and we didn’t score,” Tocchet said. “I mean, I don’t have an answer. We had a couple of good things, but we started to panic… We got a little away from what we do. Some of those guys were sluggish and that’s what happens when you’re sluggish.

“That stuff comes back to haunt you.”

The Coyotes got back into the playoff race with their recent six-game surge, but remain three points back of the final wild-card spot, trailing the Minnesota Wild who picked up one point on Tuesday.

"You try to warn people,” Tocchet said. “We had two days off. We had a day off the other day and you felt we were prepared. We’re not built to have four or five guys just not play well. We need everybody. We need some guys, in crucial times, to keep the momentum. We didn’t do that tonight and I’m a little disappointed.”

The Coyotes return to the ice on Thursday against the Western Conference-leading Calgary Flames.