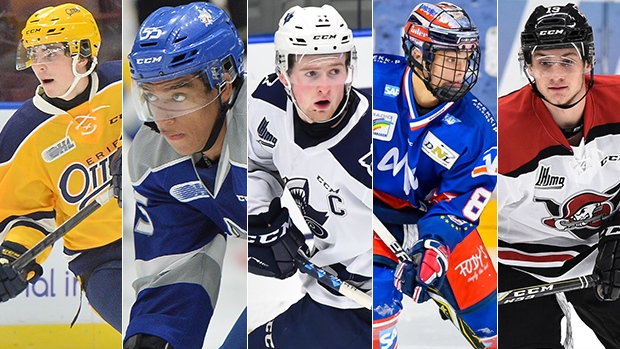 There’s a good reason why the hashtag #DernièreForLafrenière is a thing in hockey’s social media circles: The kid can really play.

Rimouski Oceanic left winger Alexis Lafrenière is off to a torrid start in the Quebec Major Junior Hockey League this season, racking up 34 points in his first 13 games. It’s the type of offensive production that could put him in the running for a second consecutive CHL Player of the Year Award and lets the fans of lottery-bound NHL teams start to dream of better days.

Lafrenière is far from the only member of the 2020 draft class who is turning heads with a strong start. TSN Director of Scouting Craig Button takes a look at five prospects who are delivering on the hype and increasing their stock:

The reigning CHL Player of the Year is the best junior in Canada. Lafrenière has four four-point games, two three-point games and a five-point game dot his scoring record. After being held scoreless in the first game of the season, he has registered 34 points in 12 games. There is no reason to believe Lafrenière won’t continue dominating at this torrid pace and could become the second player in CHL history to be named CHL Player of the Year in consecutive seasons, joining Sidney Crosby.

The 6-foot-4, 213-pound Byfield is the most interesting prospect in the world. He strikes an imposing figure but doesn’t play with a physically imposing style. His hands are Evgeni Malkin- like, and it’s difficult to wrest the puck from his control. He has been blanked on the scoresheet just once this season and leads the OHL with 27 points in 13 GP.

(Video of his goal & two of assists, no look from behind net and the quick pass down to net)

The baby-faced Stutzle looks so young that it often feels like he arrived at the wrong game by accident. What’s no accident is how gifted and talented the versatile forward is. He plays with a confidence and swagger belying his age (17). He has a Patrick Kane-like presence on the ice and it’s not a stretch to think he may be the best European available for the 2020 draft.

Watch the quickness of Tim Stutzle's play making, as well as his goal scoring ability with a one-timer goal on the power play.

Drysdale is making a strong statement that he’s the best defenseman available in the 2020 draft. His game has a striking similarity to Maple Leafs’ blueliner Morgan Rielly. Drysdale has always been a dynamic offensive player, but he’s developed into a well-rounded blueliner who excels in all situations. His skating affords him the opportunity to beat pressure defensively and transition with the attack. Drysdale has been excellent in the offensive zone, as evidenced by his five goals and 17 points in 12 games.

Mercer wasn’t in the early TSN Hockey rankings, but he will be once the next editions are out. Mercer is a product of Newfoundland, like 2019 16th-overall pick Alex Newhook, and should add to the list of cod-kissing Newfoundlanders drafted in first round. Mercer scored 30 goals last season, so his early-season offensive numbers shouldn’t come as a surprise. But Mercer is proving he can score in multiple ways and play with a real hunger and determination. He’s got 12 markers in his first 13 games, putting him well on the way to topping the 50-goal mark this season.