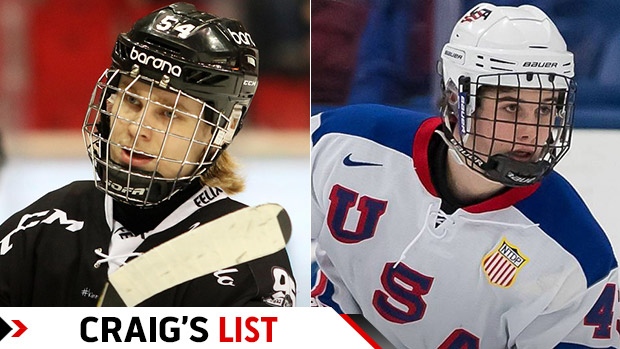 New Year’s Eve at the World Juniors is set to feature a clash of the top two prospects on the December edition of Craig’s List ahead of the 2019 NHL Draft.

Team USA and Jack Hughes will face Finland and Kaapo Kakko in Victoria that night, with the two talented forwards sure to be in the spotlight.

Hughes has continued his torrid pace for the U.S. National Development U18 Team this season, racking up 48 points (10 goals, 38 assists) in 25 games. He has been firmly entrenched atop these rankings since September and shows no signs of going anywhere but first overall next June in Vancouver.

Kakko, a winger, has impressed playing against men as a 17-year-old for TPS of the Finnish Liiga. Our No. 2 prospect has 17 points (seven goals, 10 assists) in 25 games this season.

Russian right wing Vasili Podkolzin has jumped three spots from our October ranking to land at No. 3 this month. Podkolzin, who is currently playing for his national team at the World Junior A Challenge in Bonnyville, Alta., is a complete player who can excel in all situations. His style of play and approach to the game reminds me of Pavel Datsyuk.

Two Western Hockey League forwards round out the top five. Lethbridge Hurricanes centre Dylan Cozens (16 goals, 25 assists in 30 games) and Saskatoon Blades centre Kirby Dach (14 goals, 28 assists in 33 games) both have the skating and skill necessary to thrive in today’s NHL. There isn’t a team in the league that doesn’t covet their combination of size and talent.

Swedish defenceman Philip Broberg is the highest blueliner on this month’s list at No. 6, followed closely by Bowen Byram of the Vancouver Giants (No. 8). Broberg, an elite skater, and Byram, an elite puck handler, both project as top-pairing defenceman.

Three other American forwards also land in the top 10 this month and it feels like they could form a line for Team USA in the future. Matthew Boldy (No. 7) is a left winger for the USNTDP, Trevor Zegras (No. 9) is a centre for the USNTDP and Arthur Kaliyev (No. 10) plays right wing for the Hamilton Bulldogs of the Ontario Hockey League.

Zegras jumped three spots from No. 12 in our September rankings on the strength of his continued development. An excellent skater, Zegras has also proven he can make plays with his hands, head and feet.