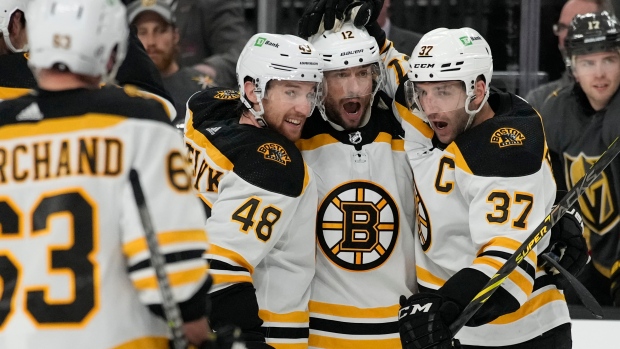 It was Smith’s third career hat trick and second with the Bruins. It’s the third consecutive season Smith has recorded a hat trick.

The Bruins improved to 4-1-0 on their six-game road trip, and 9-3-2 in their last 14 away from home. Overall they’ve won six of their last seven games as they inch closer to third-place Toronto in the Atlantic Division.

Jack Eichel and Jonathan Marchessault scored for Vegas, and Robin Lehner made 31 saves.

As Vegas’ Ben Hutton had the puck poked free while he entered the neutral zone, the Bruins immediately went into attack mode in transition. Trent Frederic fed Smith, who beat Lehner from the slot for his first goal in 12 games to give the Bruins a 1-0 lead.

Boston once again took advantage of a Vegas mishap, this time midway through the second period. Golden Knights defenseman Brayden McNabb and forward William Karlsson collided behind the net, leaving Smith alone to snag Charlie Coyle’s pass at the backdoor and catch Lehner out of position.

Smith scored his third goal of the game in the third when he smoked a shot from the left circle after Lehner was spun around by teammate Zach Whitecloud and left out of position.

Eichel ignited a relatively quiet crowd in the second period when he broke free alone into the zone and deked several times before accidentally leaving the puck off a forehand to float under Swayman’s pads and cut the lead in half.

Pastrnak scored twice in the third, early in the period off his own rebound and an empty-netter to provide the final margin.

Marchessault scored his 22nd goal with Lehner pulled late in the third.

Bruins: Play at Columbus on Saturday.