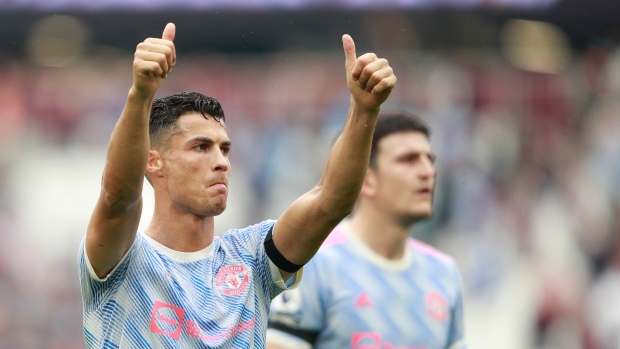 Cristiano Ronaldo took to social media to dispute the account given to the New York Times by the Ballon d'Or organizer about the Manchester United and Portugal forward's career ambitions.

Last week, France Football's Pascal Ferre told the NYT's Rory Smith "Ronaldo has only one ambition, and that is to retire with more Ballons d'Or than [Lionel] Messi - and I know that because he has told me."

"Pascal Ferre lied, he used my name to promote himself and to promote the publication he works for," Ronaldo wrote on Instagram. "It is unacceptable that the person responsible for awarding such a prestigious prize could lie in this way, in absolute disrespect for someone who has always respected France Football and the Ballon d'Or. And he lied again [Monday], justifying my absence from the gala with an alleged quarantine that has no reason to exist."

The 36-year-old Ronaldo says that winning the award isn't one of his ambitions, let alone the only one.

Argentina and Paris Saint-Germain forward Messi claimed his record seventh Ballon d'Or on Monday. Ronaldo has the second-most all-time with five and last won in 2017.

The Ballon d'Or is voted upon by 180 journalists and has been handed out since 1956. There was no 2020 winner due to the ongoing COVID-19 pandemic.