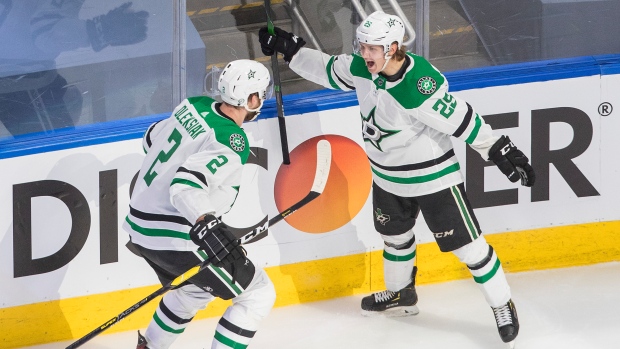 EDMONTON — Joel Kiviranta had the most unlikely of all the goals in a wild playoff series between Dallas and Colorado, sending the Stars further than they have been in 12 years

Three of them for the rookie in a thrilling Game 7, including the winner in overtime.

Kiviranta, in his only game during the series, completed a hat track 7:24 into overtime to give Dallas a 5-4 victory Friday in Game 7, and send the Stars to the Western Conference finals for the first time since 2008.

“Pretty unreal. This is what you dream about when you’re a young kid,” Kiviranta said. “I played the first Game 7 of my life. I didn’t know what to expect. ... Maybe their D just lost me a little bit. They didn’t know who was picking me up. I tried to find a soft spot. It was a great pass.”

Kiviranta moved away from the crease just before his quick shot on a pass from defenceman Andrej Sekera from behind the net. Kiviranta was playing only his third post-season game, with Andrew Cogliano unfit to play, after scoring once in 11 regular-season games.

“What Kivi did was pretty spectacular,” captain Jamie Benn said. “Those are the things you dream about when you’re a kid when you’re playing in the driveway and whatnot. That just became a reality for him."

Stars interim coach Rick Bowness was also impressed by the primary assist for the seventh Game 7 hat trick in NHL history, and first since Wayne Gretzky for the Los Angeles Kings in the 1993 conference finals.

“To tell you that we practiced Andrej behind their offensive net making those saucer passes, no, that has not been at our practice plan and our playing drills,” Bowness said. “I’m glad he knew he was behind the offensive net and not our net, where he normally is with the puck. That’s overtime hockey. And that’s bubble hockey. You just don’t know what to expect and you kind of roll with it."

Dallas will play Sunday night against Vancouver or Vegas, who had a Game 7 of their own Friday night at Rogers Place. There had never been an NHL Game 7 played at a neutral site before the two games.

The Avalanche, who also lost in Game 7 of last season's conference semis, were trying to get to their first conference final since 2002, and forced Game 7 after being down 3-1. Third-string goalie Michael Hutchinson, a 30-year-old journeyman who had never started a playoff game before winning consecutive elimination games, couldn’t make one more save after 31 on Friday.

“The series was back and forth, starting from Game 1 and tonight the game itself was no different. Back and forth," Avs coach Jared Bednar said. "Just when you think you had the one that could win the game or win the series, the other team stepped up their game and took it back over.”

Dallas, which lost in double overtime to eventual Stanley Cup champion St. Louis in the seventh game of last year's conference semi, won its third Game 7 played against Colorado. The Stars beat the Avs in the Western Conference finals in 1999 and 2000 to make it to the Stanley Cup final. The Stars won their only title in 1999.

Alexander Radulov scored two goals for Dallas, tying it at 3 with 8:32 left in regulation. But in a series when the two teams combined for 57 goals, and were tied four times in the finale, they scored 10 seconds apart after that.

“It’s a lot of excitement for sure right now and some kind of relief as well,” said Stars defenceman John Klingberg, who two assists.

Nazeem Kadri had a goal and an assist for the Avalanche, who played without captain Gabriel Landeskog (unfit to play) and didn’t get a point from scoring wizard Nathan MacKinnon for the first time in 15 games this post-season.

“I think our thoughts are pretty obvious. We felt like we were outplaying them in overtime and it was coming and felt good," MacKinnon said. “Just got hemmed in. Boys got gassed and they made a nice play. It’s tough.”

The Avs led 3-2 with 14:15 left in the second period when Kadri had a close backhander. His sixth power play goal matched Joe Sakic (1996) for the second-most in an Avalanche post-season behind Michel Goulet’s seven in 1985.

Kadri twice came oh-so-close to scoring again in that period. He had one shot ricochet off the post and Anton Khudobin was falling back when he extended his left arm for a glove save on another Kadri shot headed toward the net.

Dallas had an extra skater on the ice during a delayed penalty early in the second period rookie Denis Gurianov took a shot toward traffic, off Kiviranta’s blade and past Hutchinson.

NOTES: Khudobin had 40 saves. ... Andre Burakovsky, who won a Stanley Cup title with Washington in 2018 before getting traded to the Avs after last season, converted a turnover into an unassisted goal for a 2-1 lead midway through the first period. It was fourth goal in six career Game 7s. ... The teams also traded goals in a 69-second span early in the game, first by Radulov and then Namestnikov. ... It was the 45th time in NHL history that a Game 7 went to overtime.