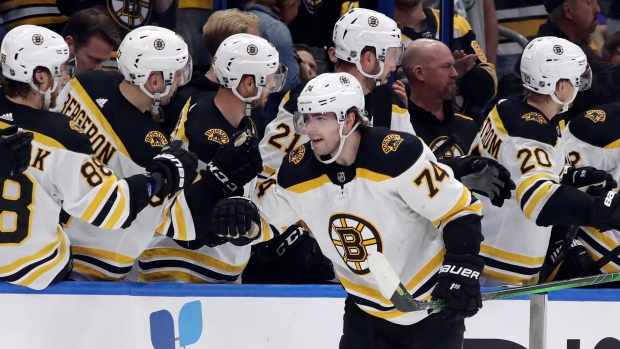 Bruins winger Jake DeBrusk believes the Presidents' Trophy winners can pick up right where they left off before the COVID-19 pandemic. Boston had won 16 of 20 games before the National Hockey League pushed pause on March 12.

"I feel confident in our group, because of the way we started this year," DeBrusk said. "With such a short summer you don't really know how you're going to start and we came out hot out of the gates so I'm confident in our group. We have the best leaders and they'll be setting the tone so I know we'll be ready to go and hopefully finish the job."

The Bruins came painfully close to winning the Stanley Cup last season, but fell to the St. Louis Blues on home ice in Game 7. With Zdeno Chara, Patrice Bergeron, Brad Marchand and David Krejci leading the way, the Bruins avoided any hangover and opened the season on an 11-1-2 run. And that leadership core has been sending a clear message to the group ahead of training camp.

"They've said, 'Just be safe and smart and be dialed in,'" DeBrusk revealed. "This is different for everyone in the world not just us as players in our situation so it's just adversity and we got to face it. We're in the dance and that's all that matters now. Obviously, we'd like to have home-ice advantage at the Garden through the whole playoffs, but there are bigger things than hockey right now. I think the tightest group will win it. That's pretty much what we're saying."

DeBrusk on supporting Kampfer's decision to opt out, Bruins' confidence level in Toronto.

DeBrusk, who picked up 35 points in 65 games this season, spoke to TSN via Zoom on Sunday and shared his reaction to teammate Steven Kampfer's decision to opt out of the NHL's return-to-play plan. The 23-year-old also explained what it would mean to hoist the Stanley Cup in his hometown of Edmonton this summer. The following is an edited transcript of the interview.

Did you have any specific concerns that you wanted to have addressed before you voted on the return-to-play plan?

"I'm a young guy so I don't really have too many concerns with family and things like that so, to be honest, not really. I'm pretty low-key with that stuff. Obviously, it's a pandemic and I can see that. Life has changed around us for the last couple of months so I just want to be smart and safe."

What was your reaction when you heard the news about Steven Kampfer opting out for family reasons?

"He texted our group and I FaceTimed him right away and just told him he has all our support. There's bigger things in life than hockey and this pandemic has made it so everyone is seeing that. We wish him the best. Our whole team supports that."

It's unclear what would lead play to be paused in Phase 4 if there's an outbreak in the bubble. If three or four Bruins players test positive on the morning of a key game, would you be worried about the integrity of the competition? Did that pop into your head?

"It definitely did pop into my head. It's a very valid question. You have to be quarantined for two weeks after that so do you miss a whole round? That's definitely a concern. But, at the same time, we're going to be in a bubble and we're going to be pretty controlled in there so I don't know how that's going to happen...It's one of those things that, as a player, especially now with training camp starting, you have to be really aware of what you're doing and where you're going and just being safe. You have to make a mental note of it and that comes from our leadership on down."

The award nominees will be unveiled in the coming days and David Pastrnak will certainly get some Hart Trophy consideration after tying for the Rocket Richard Trophy. How would you describe what he did in the regular season?

"Oh, it was insane. He had like four hat tricks in the first month or something like that. I couldn't believe it. He was playing NHL 20, like the video game, and it was 'Pro Mode.' He was elite this year. He's been a good player for our team since I've been here so it wasn't necessarily a shock to me, but it just seemed like he was answering the bell with every, single thing teams were throwing at him. He kind of became more of a complete player as well. I don't think he gets enough credit for that, but any time you play 20-25 minutes as a winger you're doing something right."

David Pastrnak (@pastrnak96) is only just getting started. 🍝 pic.twitter.com/eeFOofig86

How do you feel about your game?

"I feel good about my game coming into this postseason. I had a good break, a nice little mental break. I think everybody did. It was just before the playoff push when things stopped so you're getting revved up and ready for it and it gets taken away from you. So, I took some time off, but did lots of video. My dad [former NHLer Louie DeBrusk] has taped games and every year I watch my games in the summer. It took me longer than usual this year, but I got around to that and saw some things that I definitely want to improve on. The video doesn't lie. In saying that, this is the best time to play. This is why you play the game is to play in the playoffs. I've had a lot of experience even though I'm a young guy, you know, going to the finals last year and even the year before that going on a run so I'm very confident going into this. And just excited, excited to play again. Once it gets taken away from you, you want it more."

Any sense of whether you'll be with Charlie Coyle or David Krejci once things get going at camp?

"I actually haven't seen [head coach] Bruce [Cassidy] yet so I'm not sure. If I had to guess I'd probably say Krec to start, but that's just a guess and it's not my call. Before the pause I was playing on the left and right sometimes with Krec and sometimes with Coyle so I'm comfortable with both those guys and I'm lucky to play with those guys."

Bruins GM Don Sweeney says he'd be open to holding contract talks during training camp and the playoffs. As a pending restricted free agent, is that something you'd be interested in getting into or would you prefer to wait until the end of the season?

"It's kind of a weird position and it's my first contract negotiation. Obviously, my main focus is on the team and to play the games. I don't really want to be talking about money mid-series or anything like that, you know what I mean, so that's my vibe on that. Just want to play it out and try and help the team win. Any time you have to go across the border in a pandemic you have different motivations than contract talks."

🎥 #NHLBruins GM Don Sweeney looks ahead to tomorrow's opening of training camp: "We’re all excited about playing hockey again...we’re gonna give it our best effort. Hopefully we’re able to carry it on." pic.twitter.com/WbcCqm3rYb

"I wouldn't say I'm necessarily comfortable at Scotiabank Arena. I don't think they like me there too much (chuckle). But, we've played there the last two playoffs so I guess there is more familiarity. It'll be interesting not hearing the crowd because the crowd is pretty crazy in that rink, obviously, and in a Canadian city so will definitely miss that atmosphere in that sense. I guess it's better than playing somewhere in the West where you only play there once a year. But, honestly, I don't know if there's any advantage or disadvantage without fans. But I guess it's nice that we're going to a place where we've played more than usual."

Bruce Cassidy on the possibility of playing in Toronto for a hub city: “We’ve played well in that rink in the playoffs for the most part.”

What level of intensity are you expecting in the seeding games against the Lightning, Capitals and Flyers?

There won't be fans, but the Stanley Cup will be awarded in Edmonton. What would it mean to play for it in your hometown?

"It's pretty crazy to think about. Obviously, we got to get there first and then win it but, yeah, it's something that would be very, very special for me and my family. I grew up there and I know my friends are really buzzed about it so I have a lot of people cheering me on and in my corner to get there and with our group I think we have a really good chance. If things were to work out that way it'd be amazing. It'd be unbelievable. I know, just from being there, I want to say three weeks ago, there's barely any cases of the virus and it was almost normal life. It was kind of interesting, actually. So, I'm not necessarily worried about the safety at all from that perspective. It would definitely be very fun if we were able to pull it out in my hometown."