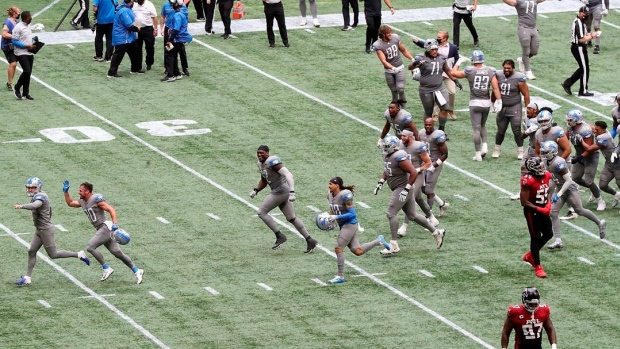 ATLANTA — Todd Gurley saw a tantalizing path to the end zone and couldn't help himself.

He tried to fall down, but it was too late.

Gurley landed on the goal line for a touchdown that, as it turned out, led to another stunning loss for the Atlanta Falcons.

Detroit let Gurley score with just over a minute remaining to get the ball back, giving Matthew Stafford enough time to drive the Lions to the winning TD as time expired Sunday.

Stafford connected with T.J. Hockenson on an ad-libbed, 11-yard scoring pass and Matt Prater, pushed back by an unsportsmanlike conduct penalty, nailed a 48-yard extra point kick to give the Lions a 23-22 victory.

All too real for the Falcons (1-6), who fired coach Dan Quinn on the heels of becoming the first team in NFL history to lose back-to-back games after leading by at least 15 points in the fourth quarter.

This one only added to the misery.

“Usually you have one or two of those games,” Gurley said. “Not multiple games.”

Trailing 16-14, the Falcons were positioned to run down the clock and kick a chip-shot field goal for the win when they picked up a first down at the Lions 10 with just over a minute remaining.

Detroit had used up all its timeouts on the drive, so there was no further way to stop the clock. Knowing their only chance was to allow a quick TD, the Lions made no attempt to stop Gurley after he took a handoff from Matt Ryan.

“It was great situational defence awareness right there,” Patricia said, going on to praise his defensive players for NOT doing what is normally their job.

Gurley burst through an intentionally gaping hole, with only one defensive player, safety Will Harris, even putting a hand on the runner. Gurley realized what the Lions were doing and tried to fall over, but he landed on the goal line with his ball-carrying hand.

The Lions (3-3) held up their hands to celebrate a touchdown.

By the other team.

“I thought it was perfect,” Patricia said. “Give the players credit. They executed it great. It was a great job by them.”

Gurley knew he had messed up.

The Falcons converted a 2-point conversion to make it 22-16, but the Lions still had a chance — especially with a quarterback like Stafford who has led so many comebacks in his career.

“I had my helmet on, thinking the game was probably going to be over,” Stafford said. “They let them score and gave us another chance.”

He drove his team 75 yards in eight lightning-quick plays, connecting with Hockenson on a 13-yard pass, Danny Amendola for 22 yards and Kenny Golladay for a 29-yard gain to the Falcons 11. The game was briefly halted to allow the replay booth official to take a look at Golladay's catch, which the Falcons argued had been trapped against the turf.

But the call was upheld and the Lions lined up quickly, spiking the ball with 2 seconds left to set up the final play. Stafford was pressured in the pocket, rolled to his left and spotted Hockenson breaking free across the end zone.

Touchdown, Lions, who have won two straight games for the first time since early in the 2019 season.

“Hock did a nice job of kind of getting lost,” Stafford said. “I was able to find him.”

Adding one last bit of drama to a bizarre final quarter, Detroit was penalized 15 yards for its raucous celebration. That backed up the extra-point attempt to the 30-yard line, but Prater knocked it through to win the game.

Ryan was 31 of 42 for 338 yards and a touchdown, while Gurley ran for a pair of touchdowns.

He'd love to have that second one back.

“My job is just going down,” Gurley said. “I'm taking all the responsibility.”

Stafford has now led 30 fourth-quarter comebacks and 36 game-winning drives in his career.

He also became the second player in the Super Bowl era to throw two game-winning touchdown passes with no time on the clock.

The other was Tim Couch.

“I love this game. I love competing,” Stafford said. “There’s no more competitive, pressure-packed situation than ... no time left.”

Falcons WR Russell Gage appeared to be seriously injured when Detroit's linebacker Reggie Ragland pinned his left leg making a tackle on a short pass play in the first quarter. Gage had to be helped off the field with a knee injury, but he was able to return to the game in the second half.

Lions: Will be seeking their first win of the year at Ford Field when they host the Indianapolis Colts next Sunday. Detroit is 0-2 at home.

Falcons: Face a short turnaround heading into Thursday night's game at Carolina. Atlanta lost to the Panthers 23-16 when the NFC South rivals played at Mercedes-Benz Stadium on Oct. 11.