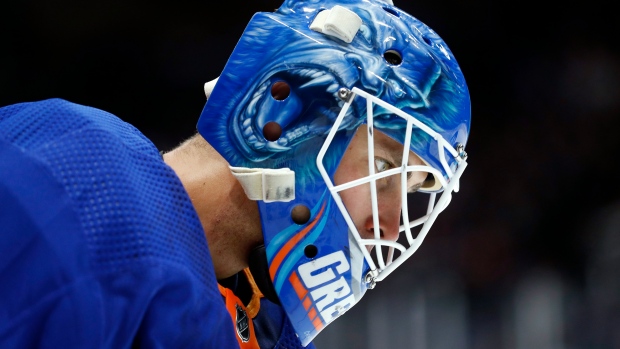 Thomas Greiss is headed to the Motor City.

According to TSN Hockey Insider Pierre LeBrun, Greiss and the Detroit Red Wings have agreed to a two-year deal that carries an average annual value of $3.6 million.

LeBrun adds that Greiss will receive $2.8 million in his first season and $4.4 in year two.

But that wasn't the only move Detroit made on Saturday.

The Wings announced they have agreed to terms with defenceman Troy Stecher on a two-year deal. LeBrun reports it will carry an AAV of $1.7 million.

The 34-year-old Greiss has spent the last five seasons with the New York Islanders, appearing in 31 games for the team last year. He recorded a goals-against average of 2.74 and a save percentage of .913 in 2019-20.

Greiss has also appeared in games for the Pittsburgh Penguins, Arizona Coyotes and San Jose Sharks since being selected in the third round of the 2004 draft.

Meanwhile, Stecher has been with the Vancouver Canucks the past four season and is coming off a 17-point season (five goals, 12 assists). He had a career-best 23 points in 78 games the season before.