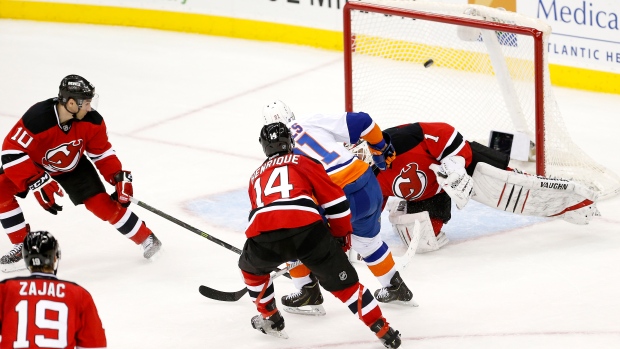 To many fans, the New Jersey Devils – along with the Detroit Red Wings -- have been a bastion of consistency. A franchise one could point to as evidence that, even in a hard cap league, long-term success was sustainable. Their track record since the ’94 lockout speaks for itself: nine division championships, five conference titles, and three Stanley Cups. It was a combination of stifling defensive play, brilliant goaltending, and a seemingly infinite run of interchangeable parts.

Even in recent history, Lou Lamoriello’s club has fielded respectable teams. They broke the 100-point threshold and reached the Stanley Cup Final in 2011-2012. Last year’s team was something of a statistical oddity – one of our rare great puck-possession teams that is sandbagged by something outside of 5-on-5 play. In most cases, that ‘something outside of 5-on-5 play’ is just woeful goaltending. 39-games of .901 SV% work from Martin Brodeur would qualify as just that.

Recognizing the goaltending as an issue, New Jersey decided to move on from the struggling Brodeur and towards the future, Cory Schneider. By virtue of this move and this move alone, I think a lot of people pegged the Devils as a team that could seriously contend for a playoff spot.

Of course, that hasn’t happened. The Devils are on pace for just 77 points this season, a finish that would assuredly have them as a strong contender in the draft lottery. For a team whose prospect cupboards are absolutely bare, a strong pick in the 2015 Draft isn’t the worst outcome from an ‘off year’.

But, is this year truly an off year? I think a lot of sensible people would say last year was – the goaltending eroding decent team-level performance. Is that the case in 2014-2015? We can peel out New Jersey’s goal rates, scoring chance rates, and possession rates (via Corsi%) to see if there’s something funny going on. Using data from the 2007-2008 season onward can give us an idea as to where this year’s run ranks against years past. A vertical line will split all prior seasons from this year’s for clarity’s sake:

We know the Devils are struggling this year. But their performance – at least compared to the past seven seasons – is historically bad.

The Devils’ notorious stinginess has turned into little more than a willingness to let other teams dictate play at 5-on-5, no matter if you look at the larger sample of Corsi%, or the smaller sample of ScoringChance%. The Devils’ current possession rates are the lowest we have seen in the analytics era, and their tumble during the first fifty games of this season has just been a total plunge to the bottom of the National Hockey League.

The standings tell us the Devils are bad. The underlying numbers say that the Devils deserve to be where they are in the standings. But, simply saying a team has rapidly deteriorated doesn’t explain the sudden drop-off. Last year’s team looks rather mint by Corsi% or ScoringChance% standards, and this is a roster mostly comprised of the same pieces.

When an entire team is struggling, it’s difficult to pinpoint just what line or what pairing is specifically getting beaten up. In New Jersey’s case, everyone has taken a step back, so comparisons against last year’s 5-on-5 numbers are going to be gory across the board. What if we compared to expected numbers based on league norms, though, and broke those comparisons down by line and pairing? The disparities may highlight what players are playing reasonably well, and what players are struggling.

What I’ve done here is sorted each forward and defensemen by ice time, then compared the respective player’s Corsi% against the league average player in that role (e.g. first line forward, second-pairing defender – with HockeyGraphs supplying the “expected” numbers). Who stands out?

We have talked about Jaromir Jagr being a timeless masterpiece before, and for good reason. It’s amazing to still say this, but even as a 42-year old, he’s a bona fide first-line forward. We know this because he’s out-performing most first-line forwards by Corsi% standards at an age where most players’ production has long fallen off of a cliff.

The problem with this is that he hasn’t had much help. Zajac’s been OK, and Elias has been good, but limited at times due to injury/illness. New Jersey’s ‘second line’ is really where they’re getting annihilated. Adam Henrique, Dainius Zubrus, Mike Cammalleri, and Michael

Ryder are all getting territorially pummeled. And, the bottom-six isn’t helping things along either, generally underperforming even their limited expectations.

Let’s look at defencemen next:

There’s been a lot of talk about Adam Larsson and his respective struggles this year, but it’s hard to really wince at what he’s done when he’s played the fifth-most minutes on the back-end and, by extension, compares favorably to most third-pairing guys. Jon Merrill, on the other hand? That’s an ugly gap. It’s probably worth noting that if your top-three defensemen (by ice time) are underperforming and bottom-three defensemen (by ice time) are overperforming, maybe deployment needs to be reconsidered. That does seem to be an area that the

Devils have addressed more recently, with Larsson playing more than 23 minutes per game since the start of January, while Merill’s ice time dropped to 19:37 per game in January.

Overall, I think New Jersey’s decline is really an interesting topic that’s in need of more thorough work. I suspect age regression is playing a big role in the poor play across the board, and with little available in terms of marquee prospects, the Devils front office is sort of sitting in hockey purgatory right now.

It comes as no surprise to hear that the coaching staff is considering radical change as a result of this, like playing Cammalleri at centre. The season is lost, and the few players who are performing are going to age out of the league in coming years. If there’s ever a time to experiment, it’s now.