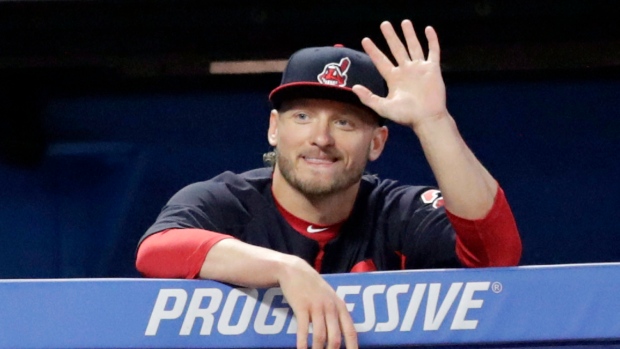 CLEVELAND — Josh Donaldson experienced flight issues from Florida on his first official day as a member of the Indians.

His on-field arrival may be delayed as well.

The 2015 AL MVP did not get to Progressive Field until just before the start of the game Saturday night, a day after Cleveland acquired the free-swinging third baseman in a trade with Toronto — a deal the AL Central leaders hope propels them to the World Series.

"He can hit the ball really hard," Indians manager Terry Francona said. "When he's in that batter's box, he's one of the guys who, you think, 'Uh oh.' Now we can be cheering for him. That's what I told him."

Donaldson, whose sometimes turbulent tenure during four seasons with the Blue Jays ended late Friday night, put on his new No. 27 uniform — he can't wear No. 20 because Frank Robinson's jersey is retired in Cleveland — and joined his teammates in the dugout as they played the Tampa Bay Rays.

A new home, a fresh start.

Donaldson has been limited to just 36 games this season because of an assortment of injuries, most recently a calf strain that has lingered, sidelining him for three months. But the 32-year-old, when healthy, is one of the league's most dangerous hitters and the Indians are eager to add him to their lineup.

"He's an MVP-type player," Francona said, "a middle-of-the-order bat that, a guy that when he was on the other team, I used to joke with (third-base coach Brad Mills) Millsy, 'I hope he swings so hard he hurts his back.' He kinda puts a little fear into you when he gets in the batter's box.

"He plays with an edge. He plays hard. Again, there's no crystal ball, and we know that. We know there's some risk there, but it's got a chance to make us better."

Francona met with the team's medical staff Saturday and received a positive report on Donaldson. He's confident there's time left in the season for him to get ready.

Francona did not want to discuss any of the team's plans over the next few weeks with Donaldson before talking to him personally.

In the deal, the Indians also received $2.7 million to cover most of the $3.7 million remaining on Donaldson's $23 million salary. Because he was traded, he will be a free agent after the season and the Blue Jays will not receive any other compensation.

It was a low-risk, high-reward trade by the Indians, who made a similar move last season by getting slugger Jay Bruce from the New York Mets for the post-season.

And while Donaldson's bat could make the Indians' lineup deeper, he's also causing an infield shift.

When he's ready, Donaldson will play third with the Indians moving All-Star Jose Ramirez to second and pushing Jason Kipnis into the outfield.

Francona met with Ramirez and Kipnis to make sure everyone was on the same page. Francona previously said he was reluctant to move Ramirez, who came up as a middle infielder.

"His concern was going back and forth, so I told him we wouldn't do that," Francona said. "I talked to Kip and we knew this would affect Kip more than anybody, and I don't think he was jumping for joy and I don't think we expected him to."

Francona said Kipnis will soon begin taking fly balls in the outfield, and it's possible he could move around while Donaldson gets ready.

Francona told Kipnis that Cleveland owner Paul Dolan and the front office extended themselves to get Donaldson and everyone had to do their parts.

"I explained to him, 'You know our owner went and did this and I have to do my job, too, so you gotta be the best option,' " Francona said. "I don't think it's fun to hear that, but Kip's a pretty good competitor, so we'll see how it goes."

It's an awkward situation, but Francona believes Donaldson will be welcomed by his new teammates.

"Guys aren't new for very long," he said. "It's amazing in this game, when you put your uniform on and you compete with your teammates, they become your teammates real quick, especially with that group."