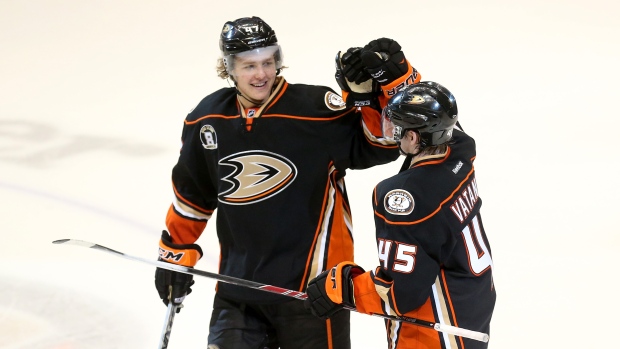 The Anaheim Ducks' run to the Western Conference Final has proven to be a costly one.

General manager Bob Murray announced Thursday that defencemen Hampus Lindholm and Sami Vatanen incurred major shoulder injuries and will be out of action long-term after surgery.

Murray says that Lindholm, 23, will be out four to five months, while Vatanen will be out even longer than that.

Lindholm, coming off of his fourth National Hockey League campaign, had a goal and three assists in 17 playoff games, while Vatanen - in his fifth year with the Ducks - tallied a goal and five assists in 12 postseason contests.

Murray also revealed that Patrick Eaves was unable to skate due to a deep bone bruise and a high-ankle sprain. He missed the entire Western Conference Final, while forward Nate Thompson played the series with a hairline fracture in his back. Forward Jared Boll was dealing with a bad back. Forward Rickard Rakell was also dealing with a high-ankle sprain, which forced him to miss Games 5 and 6 against the Nashville Predators.

The injuries to the defence pair of rearguards could complicate matters for the Ducks when it comes to next month's expansion draft.

With Corey Perry, Ryan Getzlaf, Ryan Kesler and Kevin Bieksa - who revealed on Thursday that he tore his MCL during the playoffs, but wouldn't need surgery - having no-movement clauses and requiring protection, the team faces the very real prospect of losing a young defenceman like Lindholm, Vatanen or Josh Manson or an impact forward like Jakob Silfverberg to the Vegas Golden Knights.

Teams can protect seven forwards, three defencemen and one goalie or eight skaters (forwards and defencemen) and a goalie. Teams must submit their protected lists by 5pm et on June 17 ahead of the June 21 expansion draft.