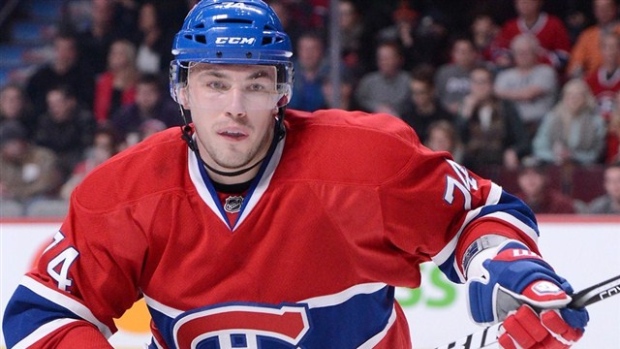 Montreal Canadiens defenceman Alexei Emelin is expected to miss at least a week with a shoulder injury.

Emelin was injured early in the Canadiens' 4-2 Wednesday night loss to the Ottawa Senators when he collided with Senators forward Mark Stone.

In 55 games with the Canadiens this season Emelin, 28, has scored two goals and 11 assists.

Emelin will be reevaluated next week to see if he isa able to play.

The news marks the second injury to the Habs' blue line this week.

Sergei Gonchar left Saturday's game against the Toronto Maple Leafs in the second period after being hit by David Clarkson.

Gonchar has not yet returned to the Canadiens line-up.

The Canadiens were down to four defenceman for part of Wednesday's game, with P.K. Subban missing time after blocking a shot late in the second period. He returned to action in the third and wound up playing a career-high 35:21.

"It was tough to play with just four defencemen for a while there," Nathan Beaulieu said after the game. "Seeing Emelin go down like that so early into the game was a difficult blow to take."

"After that, Subban went down while sacrificing himself in front of a shot," Beaulieu continued. "Playing with just five d-men is hard enough, but four is even tougher."

Subban will dress for the warm-up Thursday night against Florida and will likely play, per a team tweet.

The Canadiens called up defenceman Jarred Tinordi from the American Hockey League's Hamilton Bulldogs after Wednesday's game and head coach Michel Therrien said he would be in the lineup against Florida alongside Greg Pateryn.