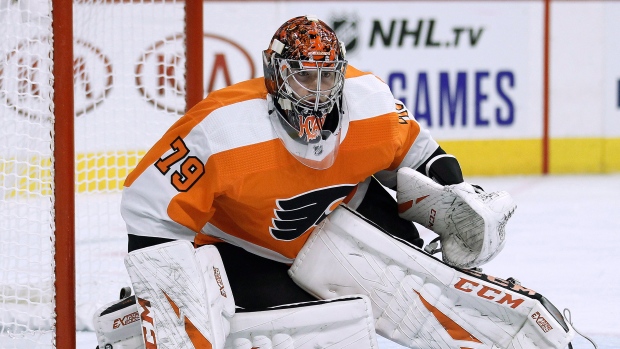 Carter Hart arrived in Buffalo for the 2018 World Juniors as Team Canada's undisputed starting goalie, owning the best numbers in the Canadian Hockey League. His journey that year ended with a gold medal, but Hart's story at the event included an unexpected chapter.

Opposing countries caught on to the fact that the native of Sherwood Park, Alb. had an unusual superstition. Hart always had to be the last player off the ice at the end of a period. So, a couple teams tried to mess with the Everett Silvertip by leaving their back-up goalie on to wait him out. After the first period of the quarterfinal against Switzerland, Hart left the ice only to return after the opposing player, Matteo Ritz, left.

Carter Hart has a superstition where he has to be the last player off of the ice. The Swiss backup goalie wasn't leaving the ice during the intermission, so Hart pretended to leave and came back out pic.twitter.com/R7WtK18oEB

Ultimately, Hart was unfazed and his talent carried the day.

But when he returned to the Western Hockey League, Hart was dealing with a new reality. His secret was out and opponents, who had been dominated by the two-time CHL goalie of the year, sought to exploit it.

"I got exposed pretty good for that," he recalled. "I probably took it too far. That's something that was a big lesson for me. It was a superstition of mine, but I just realized that it has no effect on who I am and how I play the game of hockey. It has no effect on the outcome of the hockey game and when I realized that I stopped doing it. I learned that going forward, especially now in the NHL, guys look for certain things to try and throw off other players. I do still have superstitions and routines, but they are things that no one would really know or could really affect."

Hart remains a creature of habit. During that same World Junior run he revealed he had been eating the same breakfast – three eggs, two pieces of toast and a glass of chocolate milk – every day for four years.

"I don't eat the same breakfast anymore," he said with a smile. "Actually, I found out that eggs upset my stomach so I don't eat eggs at all. My go-to breakfast now is two pieces of toast with cashew butter, sliced banana on it and then a smoothie to drink. That's pretty much what I eat for every breakfast."

Change has proven to be a positive for Hart's stomach and his psyche.

"Honestly, I'm not as superstitious as I was in junior, nowhere near as close. I've kind of gotten away from that. I'm more just about routines. I do everything at a certain time or in a certain way and that's pretty much it."

A highly-touted prospect, Hart has lived up to the hype in Philadelphia, a notoriously tough market, especially for goalies. Through two seasons with the Flyers, he's 40-26-4 with a .915 save percentage. Prior to the pandemic pause, Hart had backstopped Philadelphia to within a point of the Metropolitan Division lead.

The 21-year-old spoke to TSN this week via Zoom to share some insight on his quick ascent and reveal who he considers to be the toughest shooters in the National Hockey League. The following is an edited transcript of the conversation.

In Toronto, James van Riemsdyk had a reputation for having pretty extensive routines. Have you guys bonded over that?

"He's definitely routine-oriented. He's a guy that’s been a big help and has taken me under his wing a little bit and shown me some off-ice things with how he treats his body and what he puts into his body. He's got all sorts of people at his fingertips for different types of bodywork, massages, therapy and he's really opened my eyes to that world of things and with his approach to every practice and every game. We kind of arrive around similar times. I usually get there like two hours, 50 [minutes], two hours, 45 [minutes] before. I mean, he's always warming up. He's probably got the longest warm-up in the NHL, like, he's constantly warming up before the game and doesn't stop."

Flyers goaltender Carter Hart joins @markhmasters to talk about his juggling skills and how he's been spending his free time, discuss superstitions, his team's culture in the locker room, how he feels about playing with no fans, and more.

What allowed you to find a comfort level going from a rookie to a sophomore in the NHL?

"Just all the different experiences I went through in my first year with the schedule, all the travel, learning from guys like [van Riemsdyk] and even other guys like [Claude Giroux] and Jake [Voracek]. They almost played a big brother role for me stepping up in situations. At the end of [my rookie] year, I think we had two months left in the season, and they said I could get a place or move out of the hotel ... and I didn't really want to sign a lease because it was so late in the season and then Jake said, 'Hey, I got an open spot in my old apartment. No one's there and it's fully furnished, all you have to do is get a mattress and you can move in.' I was like, 'That’s great! How much do I owe you?' And he's like, 'Nothing, don't worry about it.' He just let me move in. At Christmas time I had nowhere to go and G invited me over with his family for Christmas dinner."

How would you describe Christmas at the Giroux household?

"I remember we played some sort of board game. I can't remember what it was called. It was Telestrations or something. It was a pretty fun game and they're a great family. It was with Claude's wife, her side of the family, so they're great people and for G to do that, invite me over, that was pretty cool. All of our older guys, leadership group of guys, are all great and, for me, coming into the league last year at 20, coming up in the middle of the season, they treated me really well and made me feel like I was a part of the team right away. We have such a great group of guys and I think that's why we've had success this year is due to that locker room culture."

“When they (Montreal Canadiens) have Carey Price in net, they have a chance every night they play because Carey Price is that good.
I think Carter Hart is right there”

You've quickly endeared yourself to your teammates and, it seems, Flyers Nation. Eric Lindros recently heaped praise on you comparing your impact on the team to how Carey Price helps the Canadiens. How well do you know the Big E?

"Lindros was arguably one of the best players in the game and a Flyers icon. He actually came to a couple of our games this year. His son, Carl, went for a skate and I think Carl wants to be a goalie. I don't think his dad wants him to be one, but I know he loves the position and Eric was saying that Carl loves watching me play. He actually had my jersey on, which was pretty cool. I was getting worked on in the training room with one of our massage therapists and Eric was in there with his son and we had a good chat and it was cool to see that Carl, even though his dad is Eric Lindros, he wants to be a goalie (smile) or so I'm hearing."

Do you feel like you've established yourself as a top NHL goalie?

"I mean, we're just trying to win as many hockey games as we can. I think with team success comes individual success. I'm lucky to be in a good situation with a good group of guys and I think right from the get-go when I came up I knew we had something special with the locker room culture. For sure, I want to be the best in the world and I always work every day to get to that point, but right now I just have to be focused on winning hockey games and giving my team a chance every single night."

Who are the toughest shooters you face?

"First of all, [Alex Ovechkin] for sure. His snapper is just ridiculously hard. Obviously, his one-timer as well. I would say, Sid [Crosby] has a good release and has a good backhand. Trying to think of some divisional opponents. [Artemi] Panarin has a pretty good release. Who else do we got? [David] Pastrnak is a little shifty player who has a lot of skill. I'd probably say those guys are some of the toughest."

Huge save by Carter Hart on the David Pastrnak penalty shot pic.twitter.com/mRnKirYjUl

Do you study the top shooters much?

"Obviously, we'll talk about it a little bit with our team meetings with team tendencies and how we prepare to play them but, I mean, personally, I don't like to think about too many things when I'm playing. When you play guys like Ovi or Sid you know their power-play tendencies and you know the way they play the game or structure their offence. For me, I don't really care who we're playing. I come in with the same approach and just try and stop the puck."

What will it be like for goalies if the season resumes in the summer after such a long break?

"I'm not really sure. I'm not sure what the plan is. You hear so much about what's going on and what the possibilities are, but I'm sure when we do come back they'll give us enough time to get prepared physically and mentally to get back into game mode. It's a different situation that we're in and something that no one has had to face before, but as professionals it's our job to face that adversity and overcome it and just play the game."

'Knowledge and creativity' the only training limitations for goalies in pandemic. MORE: https://t.co/Qoa4QGkmqu pic.twitter.com/HYvUbq2XHK

Will playing with no fans change the dynamic much for goalies? Will communication with defencemen be easier?