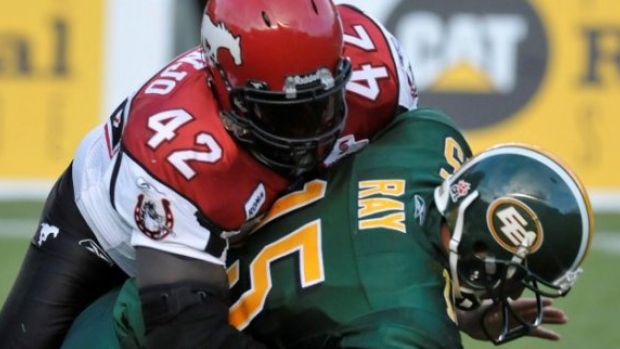 CALGARY — Mike Labinjo, who participated in the Super Bowl and won a Grey Cup with the Calgary Stampeders, has died. He was 38.

The Calgary Stampeders, who Labinjo played for from 2007-10, confirmed Labinjo's death Saturday. The cause of death was not immediately available.

"We are deeply saddened to learn of Mike's death," John Hufnagel, Calgary's president and general manager, said in a statement. "He was a big man, with a big personality to match and he was a key part of our Grey Cup championship team in 2008.

"The team offers its condolences to Mike's family and friends."

The six-foot, 285-pound Toronto native played collegiately at Michigan State (2000-03) before being taken in the third round, No. 25 overall, by Calgary in the 2003 CFL draft. Labinjo was an honorable mention All-Big Ten selection and named the Spartans' defensive MVP in 2003.

He led Michigan State in sacks in 2001 (five) and tied for team lead in interceptions in 2003 (three). He ranks ninth in school history in tackles for a loss (35).

Instead of heading to the CFL, Labinjo signed as a free agent with the Philadelphia Eagles in 2004. He played in the team's 24-21 Super Bowl loss to the New England Patriots.

Labinjo was released by the Eagles during the '05 season and later joined joined the Indianapolis Colts, registering two tackles and a half sack in two games, before ending the campaign with the Miami Dolphins.

The following season, he backed up Zach Thomas, Miami's all-star linebacker. He was released by Miami at the end of the season and re-signed with Indianapolis in the off-season, but was let go in May 2007.

In all, Labinjo appeared in 10 career NFL games, registering 19 tackles and a forced fumble.

Labinjo joined the Stampeders on July 16, 2007 and picked up two tackles and four special-teams tackles in six games before suffering a season-ending elbow injury.

The following season, Labinjo had five sacks, tying him for the team lead with Canadian Miguel Robede and Charleston Hughes. He also had 33 regular-season tackles, and registered eight tackles and three sacks in Calgary's 22-18 win over B.C. in the West Division final.

Labinjo was also a key figure for Calgary in its 22-14 Grey Cup win over Montreal with three tackles, one sack and four pass deflections.

The Stampeders dealt Labinjo to Montreal on Jan. 12, 2001 for future considerations, but the Alouettes voided the deal a week later amid concerns of an elbow operation Labinjo had undergone.

Calgary released Labinjo on May 11, 2011, ending his pro football career.

The Stampeders said Labinjo remained in the Alberta city following his football career, working at Solengo Capital and FirstService Residential.