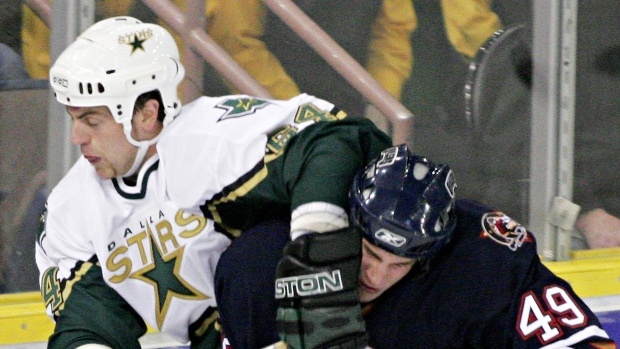 Defenceman Matt Nickerson, a third-round pick of the Dallas Stars in 2003, was suspended 20 games and had his contract rescinded by his team in England after attacking a fan during a game over the weekend.

The Milton Keynes Lightning of the Elite Ice Hockey League announced on Thursday that they had parted ways with the 33-year-old defenceman over the incident.

"Ice Hockey is a family sport and it is unacceptable that at any time supporters are threatened or made to feel unsafe," the club said in a statement. "As a club we do not condone what happened and Matt has been held accountable for his actions by both the Elite League Department of Player Safety and by the club. Milton Keynes Lightning takes the safety of their players, opposing players and most importantly the spectators very seriously, and the League need to ensure that all member clubs are compliant in their player and spectator safety procedures."

The incident occurred following a game on Sunday with the Guildford Flames.

According to the league's incident report, Nickerson "deliver[ed] a forceful backhand punch directly to the head of the fan."

Video shows Nickerson exited the ice and immediately taking a swing at a fan who appeared to be taunting the native of Old Lyme, CT.

"While leaving the playing surface, Nickerson took his stick and moved it from his right hand to his left hand," the official report concluded. "It is an indication that there is premeditated thought on Nickerson's part to do something physical."

Nickerson had already received a match penalty for abuse of official prior to leaving the ice.

Drafted out of Clarkson University in 2003 with the 99th overall pick, Nickerson signed a three-year, entry-level deal with the Stars, but never reached the NHL. He spent two seasons in the American Hockey League with the Stars' affiliate Iowa Stars in 2006-07 and with the Edmonton Oilers' affiliate Springfield Falcons in 2009-10, where he was released after only 19 games.

Nickerson spent time in Finland before coming to the Elitle League in 2013-14 with Scottish club Fife Flyers, widely considered to be the oldest hockey team in the United Kingdom. After two seasons with the Flyers, Nickerson joined the Belfast Giants prior to signing with the expansion Lightning last summer.