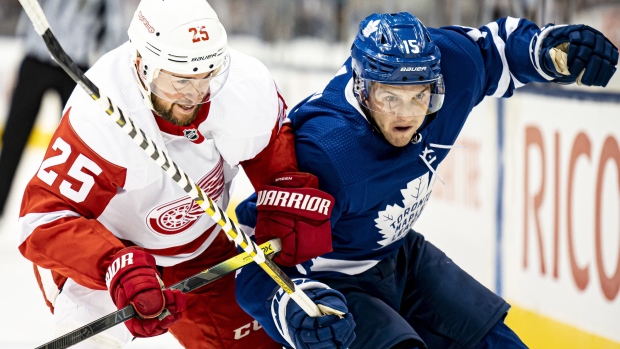 TSN Toronto reporter Mark Masters checks in daily with news and notes on the Maple Leafs, who practised at Ford Performance Centre on Friday ahead of Saturday's home game against the Boston Bruins.

With John Tavares (broken finger) out for at least two weeks, Alexander Kerfoot will move into a top-six role. Kerfoot, who was acquired in an off-season trade with the Colorado Avalanche, skated between Ilya Mikheyev and Mitch Marner at Friday's practice.

"Kerf's way better than we expected," said head coach Mike Babcock. "He's way grittier, got more grease to him. We think he's going to make way more plays as time goes on and he gets more comfortable. He's just got to continue to work on his defensive side more so he has the puck more. That's the big thing for him."

Kerfoot, who finished with 15 goals and 27 assists last season with the Avalanche, will need to adjust his focus to be effective with Marner.

"You got to have a mindset to shoot," he said. "He's going to find you in places where you might not be expecting the puck all the time so you have to be ready. There's nowhere on the ice that he's not going to find you so I got to be looking to shoot ... Obviously, Marns is one of the best players in the league so when you get the opportunity to play with him you know there’s more responsibility and you have to do a good job."

What stands out most about the dynamic right winger?

"Just how smart he is," Kerfoot noted. "The plays he makes with the puck, he does stuff that not many guys in the league can do and just watching him on a day in, day out basis, how elusive he is, he's got such good control over his edges and so confident with the puck that he makes a lot of guys look silly out there."

Kerfoot has two goals and two assists this season while averaging 14:14 of ice time per game. He had a brief chat with Babcock on the ice before practice began.

"Definitely changes a bit," Kerfoot said of his role. "Obviously, you're probably going to play a little bit more, but I got to play my game and not try and change too much."

Babcock, meanwhile, reserved the right to juggle the lines again should the early returns be negative.

"Nothing’s set in stone," the coach said with a grin, "but this is for warm-up for sure."

With Tavares out, Jason Spezza is also getting a new opportunity. He's been a healthy scratch in the last three games, but skated as the third-line centre today between Trevor Moore and Kasperi Kapanen. The 36-year-old is taking nothing for granted.

"I don't know where I'm playing," Spezza said when asked about being in the top nine. "You just want to get in the lineup, you want to play well when you get on the ice and that's why you keep yourself ready. I knew it's a long season and there would be different opportunities at different times."

Spezza believes the Tavares injury may be a blessing in disguise for the Leafs.

"It's difficult when you lose your top guy that you rely on for a lot of things," Spezza acknowledged, "but it also can make the team grow, because it gives different guys opportunities and it puts pressure on different guys to take more of a focal point and then when Johnny will inevitably be back, you know, guys gain confidence from that. As a team, if you can keep winning when you go through injuries I think it just builds the belief of your squad that you’re a good team."

The Leafs are a middling 4-3-1 on the season with all four wins (Ottawa, Columbus, Detroit and Minnesota) coming against opponents that are at .500 or worse.

​"He's one of our best goal scorers in the league," Marner said of Tavares, "so we just got to make sure we fill that void. We had the same kind of problem last year when Auston (Matthews) went out so guys just need to step up and be ready for that."

Matthews missed 14 games last season with a shoulder injury and it was Marner who stepped up big time with 18 points in that stretch as the Leafs won nine games.

Spezza lined up on the fourth line in his three games this season, but slid into the third-line role Friday, because Babcock didn't want to ​mess with the growing chemistry between Dmytro Timashov​, Nick Shore and Frederik Gauthier.

"They've actually been one of our better lines," Babcock said. "That's something that's working for us right now and we didn't want to screw around with that. So, Spezz will get an opportunity with good players ... every opportunity is what you make of it. You got to get in there and get after it."

Babcock hasn't hesitated to use his fourth line to start shifts in the defensive zone even against top lines. Last season, he often leaned on the Tavares line with Marner on Zach Hyman in that spot.

"We did it on purpose last year to John Tavares," Babcock explained, "wanted to improve his defensive game and that was a great match-up with Hyman, they started in the D-zone and were always in the O-zone ... we were waiting to get a fourth line. Over four years we've done a lot of trading to get that to work. Now, Goat seems to have come of age and Shoresy seems able to do it (but) we keep evaluating it."

The Leafs announced yesterday that Tavares will miss a minimum of two weeks. Is the 29-year-old optimistic he can return sooner than later?

"The main thing is we just have to be smart and not put myself at long-term risk and making it worse," Tavares said. "I was really hopeful that it was something I was able to play with, but the medical staff just felt that there has to be enough healing to make sure it’s stable."

Tavares, whose injured index/pointer finger was swollen and taped to the middle digit when he met with the media, could tell immediately something was wrong when a Morgan Rielly shot hit his right hand late in Wednesday's game.

"Went pretty numb so didn't feel very good," he recalled. "Just went back to the bench and it was a little more painful and obviously (with) the adrenaline, and the inflammation hadn’t really set in yet, so just finished the game."

Tavares actually scored a goal after sustaining the injury. It was only the next day that the extent of the issue was revealed.

"Honestly, didn't feel like it was too bad even waking up yesterday so was a little surprised by the circumstances," Tavares said, "but could be a lot worse."

William Nylander will fill-in for Tavares in the middle of the top power-play unit. Before the main practice started on Friday, that group hit the ice to do some work with assistant coach Paul McFarland. Nylander has usually played on the flank for the Leafs.

"He's a right-hander, Johnny's a left-hander so it’s just a little different," said Matthews. "He's going to be a shot threat, especially when the puck's on my side."

"The only difference now is Mats has that one-T option for Willy," said Marner, "and for me it’s just going to be trying to find Willy in the slot for a high tip ... he’s a pretty electric player out there, he’s going to find those holes nicely and he's not afraid to shoot it and that’s something you want in that middle spot."

^ Placeholder for Moore, who worked on PK