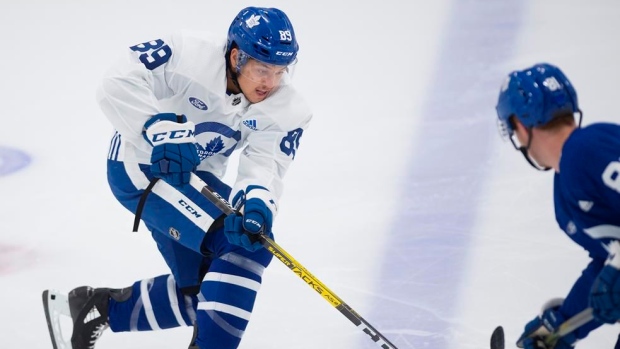 TSN Toronto reporter Mark Masters checks in daily with news and notes on the Maple Leafs, who held a a practice and scrimmage at Ford Performance Centre on Wednesday.

The possibility that Nick Robertson will make his National Hockey League debut in the playoffs is getting more and more real with every passing day at Maple Leafs training camp. The 18-year-old has now skated on left wing with Alexander Kerfoot and Kasperi Kapanen for two straight days.

"He's a guy who brings a lot of energy to our line and our team," Kapanen said. “He's got a cannon so he can shoot the puck and he makes plays and he's feisty. He plays hard and that's what we need on our line. And he keeps up with me and Kerf, too, he’s a great skater, so it's been good so far."

"I've seen some positive steps, for sure," said head coach Sheldon Keefe. “It's been really positive. Early on it was a little bit slower for him, but it seems the more experience and opportunity we've given him, he's done well with it."

Last week, Robertson's hopes of cracking the lineup appeared to be fading as he found himself practising with Toronto's reserve group. But then a minor injury to Zach Hyman opened up a spot and Robertson was given the chance to skate alongside Auston Matthews and William Nylander on Saturday.

"I'm happy to see him doing well," said veteran forward Jason Spezza. “It's obviously a jump when you get to playoff hockey, but he's been able to fit right in."

As Kapanen noted, Robertson has a "cannon" of a shot and the American used that weapon to rack up 55 goals in 46 games with the OHL's Peterborough Petes. But the 5-foot-9 teenager has quickly discovered he doesn't have as much space to operate here.

"What's stuck out is that he hasn't been able to get [his shot] off very often," observed Keefe. “When I watch him in practice and things like that, you can see that it's a real strength of his, but the challenge is adjusting to this level. There's not as much time to get it off, sticks get in the way, bodies get in the way, positionally guys are better, all those types of things. And then of course the goalies are better. The first couple of scrimmages he didn't have a shot on goal. It's taken a little while to get up to speed. He seems to be getting more involved and getting more shots and had a couple of good ones today."

That shot could be the difference-making skill that earns Robertson an unlikely audition at the most intense time of the year. In fact, it could be a secret weapon for Toronto.

"Of course at the junior level it’s become pretty well known and all that," said Keefe, "but it’s unexpected because usually players of his size and at his age, the puck doesn't come off the stick like that with too many players. He's got a great weapon there with that."

Robertson's energetic performance has lit a spark amongst the group. Most players know exactly where they'll slot in Game 1 against the Columbus Blue Jackets in their best-of-five qualifying round series. The one big battle is between Robertson and Pierre Engvall, who has been the extra forward in the last two practices.

“It's great to have the enthusiasm," Spezza said of Robertson's push for a spot. "I think it's helped drive camp. It's helped create competition, which we like, and he's put himself in a spot to show he can keep up."

Still, playing Robertson remains a risky proposition considering he's never even skated in a pre-season game in the NHL. Engvall, meanwhile, played 48 games with the Leafs this season and also played parts of three seasons under Keefe with the Marlies in the American Hockey League. He's a big body (6-foot-5, 214 pounds) who can skate well and kill penalties.

"Every other player that's in this camp has had experience and has played in the NHL, played games in the NHL, played in the minors and all those things," noted Keefe. "They know what to expect from those experiences. We, in a lot of senses, have an idea of what to expect from them. Nick is the wild card here in terms of what he can bring and how quickly he can adapt and adjust. We have to be able to give him those opportunities to be able to see how quickly we can get him up to speed."

The reason the third-line spot is open is because Andreas Johnsson is currently sidelined after undergoing knee surgery in February. The Swede was spotted on the ice before Leafs practice today.

"His plan is to come into the bubble with us and he has been skating, I want to say, for the better part of a month," Keefe revealed. “That's a real positive sign for us that he's come over here and he went through his quarantine. Chatting with him, he's in good spirits and feels good so we're happy to see him back around here, but we're going to have to be patient in terms of his timeline."

During his pre-camp media availability, general manager Kyle Dubas said Johnsson may be able to return if the Leafs win a couple series.

"He would be somebody that we could expect to see maybe, if all goes well with the end of his rehab, perhaps beginning at the second round of the actual playoffs to be safe," Dubas said on July 12. "He's done well with his rehab, he’s done it in Gothenburg, and it’s gone very well after starting it here and then going back home at the beginning of the pause. We're excited to see where he’ll be at in the coming weeks."

Last week, Kapanen posted a picture of him and Kyle Clifford on Instagram with the caption, “smashbros." It appears the veteran winger, acquired from the L.A. Kings in an early February trade, has had a big impact on the Finn.

"He's had a great influence on the whole team," Kapanen said. "He's a tough guy who works hard and every day he's at the rink early and ready to go. He's a professional and he's been around the league for a long time and won a couple Cups so that's exactly what we needed on our team."

Kapanen had two fighting majors and two roughing minors in the first 11 games after Clifford joined the Leafs. "You know, when you see a guy play hard and fight every now and then it fires me up for sure so it's been a positive impact for me," the 23-year-old said.

Another angle of Kapanen's fight, he absolutely decked him. pic.twitter.com/awenOmF271

In order to play to his potential, Kapanen needs to be physically engaged, which can be hard to do in scrimmages against teammates and friends.

"You can play hard, but I’m not going to finish absolutely every check," he admitted. “You want to win and we didn't today so [I'm] a little pissed off about that, but it’s all right."

"He's gotten better every single day in terms of how he looks and then also the energy he's playing with and practising with," said Keefe. "We all know that's such a big part of his game. When he's playing with energy and he's got pop in his step he's a much different player and he's been bringing that a lot more here the last little while. He's found a nice groove there and obviously want him to stay within that and keep building on that."

What does Kapanen expect from himself in the playoffs?

"A lot," he said. “I've been trying to stay in shape and been here in Toronto for a couple months now and I feel good about my game and feel confident and especially our line, with Kerf and Robbie, has been good so looking forward to it."

"He's got a fire under him," said Mitch Marner. "He’s brought that physical edge and he's got that speed going. He's a little cannon ball out there. He's put some big hits on people, but a great thing about Kappy is he also has that skill in him and can play that role as the skill guy as well so you got double trouble with him."

Justin Holl departed practice and didn’t return after taking a Nylander stick to the face during a drill.

"My understanding is he just needed stitches which he has now received, but he should be okay tomorrow," said Keefe. "We might see him in a shield or something for a little while."

In his absence, lefty Travis Dermott got more reps on the right side. Dermott also played on his off side with Morgan Rielly in Saturday's scrimmage.

"Travis is a great player,” said Rielly, who also skated with Dermott during some Phase 2 workouts. "Moves well. Obviously, a great skater. I’ve known him for a long time so it's not too much of a change, to be honest."

Keefe opted to keep Wednesday's scrimmage to only 20 minutes, but it turned out that wasn't enough as neither team could find the back of the net. John Tavares eventually put an end to the proceedings with an overtime marker, which sealed the training camp series for Team Auston Matthews. Jack Campbell posted a second straight shutout.

"We wanted to have greater quality today in the scrimmage, which is why we reduced the volume just keeping it at one period," Keefe explained. "We wanted to increase the quality. I thought some of the execution perhaps wasn't great but the effort and pace and all those kinds of things were really good. I thought the fact that the score stayed close, the benches were into it, there was some good energy that way and the goaltending on both sides was terrific which allowed everything to stay close and be competitive. I thought we got a lot of what we were hoping to get out of it today."

A longer scrimmage is planned on Thursday.

Winner winner, chicken dinner!
JT ends it in OT with the only goal of the game.#LeafsForever pic.twitter.com/rYdCvTqGgh