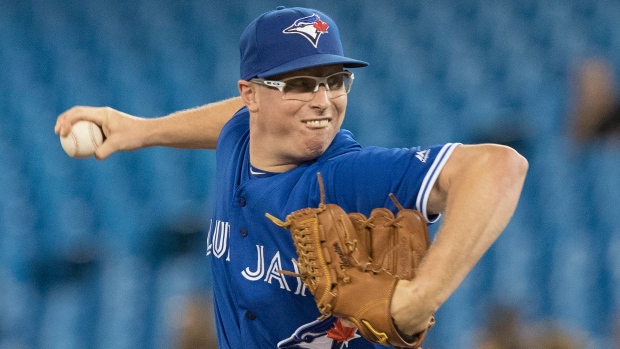 DUNEDIN, Fla. — When the Toronto Blue Jays travel north in a month, one of Trent Thornton or Shun Yamaguchi is going to have the title of No. 5 starter.

Both of them have secrets they’re not giving away that they hope will help earn them that job.

For Yamaguchi, it’s his splitter, a pitch far more common in Japan that it is in the major leagues.

Asked how he throws it and if any of his new teammates have sidled up with questions about it this spring, the charismatic right-handed’s lips were sealed.

“This is a secret,” Yamaguchi says with a grin through interpreter Yuto Sakurai. “I can’t reveal the state secret.”

What’s not a secret is it’s the key pitch in his arsenal and how the low-90s offering plays against big league hitters will be the deciding factor in how much of an impact the 32-year-old will have this season.

“My main usage for the splitter is to get a strikeout, obviously,” Yamaguchi explains. “I’ve used it that way, but depending on the situation, depending on how the drop is, I might use it as a groundout situation, as well.

“It’s a strikeout pitch, obviously, but depending on the count and the situation, I can throw it differently.”

After catching one of his bullpen sessions this week, catcher Reese McGuire came away impressed with the repertoire and slow-moving delivery.

Yamaguchi’s experience in different roles and success as a closer in Japan with a pair of 30-plus save seasons on his resume may work against him in his desire to claim a rotation spot.

He’ll get a legitimate chance to compete this spring, starting with Monday’s re-opening of renovated TD Ballpark against what should be a pretty good Atlanta Braves lineup. But from the day he signed his two year, $6.35 million deal in December, the Jays have been intrigued by the idea of using him as a versatile bullpen arm who could be a setup man in front of Ken Giles, or perhaps even an opener if the need arises.

It’s the complete opposite with Thornton. Unless it gets ugly for the 26-year-old righty this spring, they’d like him to remain a starter and sending him back to Triple-A after 154.1 innings in the big leagues as a rookie last year wouldn’t be ideal.

Add all that up and it makes Thornton the current favourite to win a rotation spot.

Thornton has a secret too, not wanting to reveal which pitch he worked on this winter, as well as having plotted out new ways to attack hitters.

“Definitely one pitch and then locations of a couple pitches, being more consistent with that,” Thornton whispers when asked in the clubhouse. “I don’t want to go too in depth. It’s some of my game plan. But I was definitely able to make huge strides with that and I’ve felt like I’ve been able to execute them (since spring training started).

Thornton got the ball rolling on the Grapefruit League season with a pair of scoreless innings Saturday against the New York Yankees, holding serve in the job battle with Yamaguchi, and to a lesser extent Anthony Kay and Jacob Waguespack.

Similar to Yamaguchi, Thornton has a go-to out pitch: His breaking ball.

Classified as a slider by Statcast, the 80.5 mph offering held batters to a .228 batting average and just a .356 slugging percentage in 2019.

Backed by a big spin rate of 3,089 rpm, third-best in all of baseball, Thornton struck out 64 hitters with the pitch and it generated a 31.8 per cent whiff rate.

It’s clearly a good pitch, but Thornton, like every young arm, wants to become more consistent with it.

That’s the biggest thing he absorbed as a rookie, the importance and never-ending search for consistency.

Yamaguchi isn’t the only pitcher on the Blue Jays’ staff who will be featuring a splitter this season.

Signed for a million bucks in 2020 with a $1.5 million club option for 2021 if things work out, Rafael Dolis has a chance to carve out an important role at the back end of manager Charlie Montoyo’s bullpen.

If he does, it’ll be because of the splitter he learned in Japan from veteran Kyuji Fujikawa, who spent time with the Chicago Cubs and Texas Rangers from 2013-15.

Once he added it to his repertoire, Dolis enjoyed four excellent years with the Hanshin Tigers, registering a 2.49 ERA across 206 innings.

His ability to keep the ball in the yard — just six homers allowed in four years — and neutralize both right-handed and left-handed hitters is what has him in the eighth inning mix with Anthony Bass.

Dolis is hoping his second MLB foray goes much better than his first when he put up a 5.48 ERA over three seasons and just 44.1 frames.

“When I was playing with the Cubs, the Tigers, the Giants, I was just throwing the ball,” Dolis said of his time in the majors prior to leaving for Japan in 2016. “Now, I’m a better pitcher. I think I could come back to the States and be much better.”

Already the favourite for the new 26th man spot because he’s out of options, Anthony Alford made a huge first impression of the spring Saturday, singling and then swiping three bases off the New York Yankees battery of pitcher Luis Avilan and catcher Josh Thole.

That’s exactly what Montoyo could use on his bench, and it would allow Alford time to carve out a bigger role and find confidence in a major league batter’s box for the first time.

Montoyo has already said the 25-year-old will play a lot this spring, battling fellow out-of-options outfielder Derek Fisher for potentially one spot.

There’s also a chance the Jays decide to keep both, giving them five outfielders on the roster to start the season.

One way that logjam could work itself out is by playing left fielder Lourdes Gurriel Jr. at first base against left-handers, something the Jays are currently considering doing from time to time.

It seems like a good idea considering LGJ crushed lefties last season, posting a .994 OPS in 115 trips to the plate against them.

Gurriel made one start at first base last season, the position his brother Yuli occupies on most days for the Houston Astros.

In honour of Tony Fernandez, who died Feb. 16 from kidney disease complications, the Jays were all wearing black bands on their left sleeves during Saturday’s Grapefruit League opener in Tampa, and will do so again Monday during the first game at renovated TD Ballpark in Dunedin.

The arm bands won’t be permanent, but the Jays are having ongoing discussions behind the scenes about how they’ll honour the former shortstop this season.​