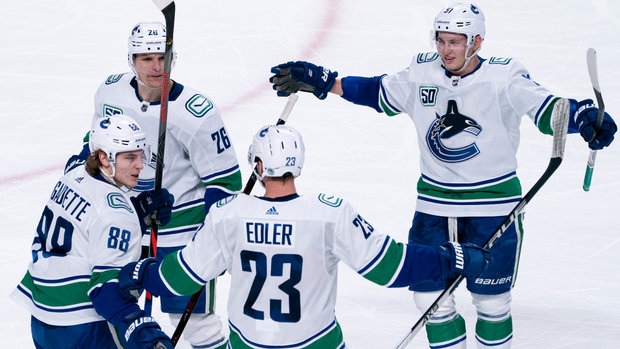 1) It's not how you start, but how you finish. Just ask the Vancouver Canucks. After digging themselves an early 2-0 hole, the team rallied for a 4-3 overtime win in Montreal to kickoff a four games in six nights road trip. The Canucks have fallen behind 2-0 sixteen times this season, but Tuesday night was just the second time they've come back to win the hockey game. They also did it in Detroit in mid-October. While Saturday against Boston was the team's biggest offensive output of the season, an argument can be made that Tuesday in Montreal was the team's biggest win to this point. Tyler Toffoli capped off a dominant pair of overtime shifts for the Canucks scoring his third goal in as many games since coming over from Los Angeles a week ago to end the night 95 seconds into OT. The Canucks had all five of the shots recorded in the extra session. Rallying to erase the 2-0 deficit and then finding a way to tie the game after the Canadiens had taken an early 3-2 lead in the third period, scoring three goals on the road and beating Carey Price three times in regulation, the Canucks needed to find a way to secure at least a single point. They did just that and then pocketed the bonus point up for grabs.

2) Give Travis Green credit for using his timeout when he did. After the Habs scored to make it 2-0 just 7:23 into the hockey game, the Canucks coach gathered his group at the bench and let the players know their start was unacceptable. Not only were the Canucks trailing 2-0, but they had been outshot 7-2 at that point and had barely touched the puck. Coaches are loathe to use their timeouts early in hockey games knowing that they may need them later or for a challenge. Usually, coaches will wait for a TV timeout and then try to ignite the players. But Green felt he couldn't afford to wait any longer and gathered the group at the bench. The move seemed to have the desired effect. From that point, the Canucks settled down, had the puck and spent a series of shifts in the Montreal zone. Eventually, after Tyler Motte draw a Shea Weber slashing penalty, the Canucks needed just four seconds of power play time to get on the scoresheet and get back in the hockey game.

3) The Canucks power play has been a weapon all season, but after a 4 for 44 stretch over 13 games in January and into February, it has emerged from its mid-season slumber and caught fire again. On Tuesday night, the Canucks went 2 for 2 with the man-advantage with Horvat scoring his 20th goal of the season in the first period and Jake Virtanen netting his 18th six minutes into the third. Both goals were well-placed shots with plenty of velocity that tested Carey Price high to the glove side. Horvat's beat the Habs netminder cleanly while Virtanen's handcuffed Price, but still found its way in. The Canucks are 7 for their last 17 on the power play. That hot stretch co-incides with the team's 4-1-1 run dating back to a 6-2 win over Nashville to start Sedin Week.

4) Tuesday was a night of big round numbers for the Canucks. JT Miller recorded his 300th NHL point assisting on Horvat's 20th goal of the season. Horvat had a goal and an assist giving him 20+30=50 on the season. But the most impressive number -- aside from the final score -- to emerge from Bell Centre was 20-year-old blueliner Quinn Hughes registering the 50th point of his remarkable rookie season. Hughes has 3+13=16 in his past 12 games. Despite close attention from the Canadiens all night, he still managed to leave his mark on the hockey game. His assist on Horvat's first period goal gives Hughes the first 50-point season by a Canuck defenseman since Christian Erhoff had 50 on the nose in 2010-11. Hughes has accomplished the feat in 61 games. No Canuck blueliner has had more than 50 points in a season since Jyrki Lumme had 54 in 1995-96.

5) The win in Montreal leaves the Canucks with 74 points through 62 games. With 20 games remaining, the Canucks could go 10-10 and still reach 94 points which seems like it should be enough to get the club into the post-season for the first time since 2015. With 30 games left, they needed 30 points to get to that 94 mark and have gone 4-4-2 over their past 10 games. That has been enough to maintain a spot above the playoff bar that entire time despite hitting a 2-4-2 rough patch and losing four in a row at one point (0-3-1). The math is starting to come into focus for the Canucks. If they can go 10-10 over their final 20, Nashville (70 points) would have go to 12-7-1 over its final 20 to finish ahead of Vancouver. Meanwhile, Winnipeg (70) would have to go something like 12-4-1 over its final 17 to jump past a 94-point Canuck team. Even Calgary (72), just two back in the standings, would have to go on an 11-6-1 sprint to the finish because the Canucks have games in hand and right now hold a significant lead in regulation and overtime victories. Ultimately, the Canucks need to hold up their end of their bargain, but they don't have to be lights out down the stretch. Something in the neighbourhood of .500 hockey should see their season extended beyond April 4th.