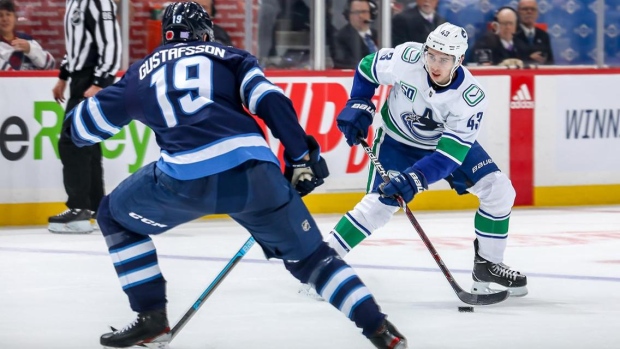 1) The Vancouver Canucks were better in Winnipeg on Friday than they were 24 hours earlier in Chicago. However, there are no prizes in the National Hockey League for silver linings or moral victories. The bottom line is the Canucks have lost back to back games in regulation for the first time since their first two games of the season after following up Thursday's 5-2 loss in the Windy City with a 4-1 setback in Winnipeg. Playing on the road for the ninth time in their last 12 outings, the Canucks actually had decent energy in a first period in which they outshot the Jets 13-9, but couldn't solve Connor Hellebuyck. Effort wasn't the issue for the Canucks on Friday. Getting pucks past the Winnipeg netminder was. In Chicago, despite registering 38 shots, the Canucks didn't really test Corey Crawford. But that wasn't the case with Hellebuyck. Elias Pettersson, Jake Virtanen and Bo Horvat all had quality scoring chances in the third period when the score was 2-1. Horvat had the best of the bunch but couldn't convert from in tight with Hellebuyck sprawled on the goal line. Just nine seconds after the Canuck captain was denied, Kyle Connor raced away and beat Thatcher Demko on a breakaway to extend the Jets lead and effectively seal the hockey game.

2) The game, to me, felt in some ways like the Canucks season opener in Edmonton. They did a lot of things well, but watched the Jets best players capitalize on their opportunities. Mark Scheifele put Winnipeg in front 2-1 late in the second period and then Connor left his mark on the hockey game in the third. The Canucks were left talking about chances while the Jets were celebrating goals. Winnipeg gained momentum with a second period power play in which the puck did not leave the Vancouver zone for a full two minutes. The Jets didn't score on that opportunity. But moments later got another power play and this time they cashed in when Jack Roslovic worked his way to the front of the net and beat Thatcher Demko. In a five minute span, it went from 1-0 Vancouver to 2-1 Winnipeg and while the Canucks didn't go quietly, they were unable to rally. JT Miller scored for the second night in a row -- his team leading eighth goal of the season -- but he needs some help. Jake Virtanen in mop-up time in Chicago is the only other Canuck forward to score in the past three games. That's not a recipe for success and a suddenly silent offense is one of the main reasons the Canucks have just one win now in their past five outings (1-2-2).

3) Chris Tanev is a warrior. Canucks fans already knew that, but that notion was underscored yet again on Friday. After leaving Thursday's game in Chicago with an upper body injury late in the first period -- Tanev said after Friday's game he wanted to return to action against the Hawks, but the doctors at United Center wouldn't permit it -- he again was forced to seek medical attention during the Jets game. Already a surprise participant on Friday night due to the events 24 hours earlier, Tanev blocked a Patrik Laine slap shot with his lower leg on one of Winnipeg's second period power plays and was completely immobilized as play went on around him. "It sucks," Tanev said post-game about being unable to help his teammates as they tried to adjust on the penalty kill. As Tanev struggled, so too did the PK eventually giving up the 1-1 goal. Tanev gives the Canucks everything he has. His commitment to the team and to putting himself in harm's way on the regular is commendable. But Canucks fans know how this story goes. So far Tanev has managed to appear in all 17 games for the hockey club this season, but it just feels like these nights and the compressed schedule are starting to take a toll. It seems inevitable that one of these games, Tanev will be forced to leave and won't be seen again for weeks. There is only so much the body can take and there are warning signs Tanev, who turns 30 next month, is nearing his limit. He'll play if he can because that's the kind of guy he is, but he's taking a beating again and only the second week of November.

4) With Tanev missing time again on Friday, Alex Edler shouldered an enormous workload yet again. Edler finished the game in Winnipeg playing a team-high 25:58 -- nearly a full minute higher than his season average -- after logging 27:15 the previous night in Chicago. There is just no let up. Last weekend in Anaheim he played a season-high 30:25 and followed that up with 29:18 of ice in San Jose the next night. Against the Jets, Edler played 9:57 of the second period alone and was on the ice for both Winnipeg goals in that period. He also played 8:46 of the third period when the Canucks were down and pressing for the tying goal. After the game, Travis Green acknowledged that the Canucks are aware that Edler's heavy workload: "We've talked about it. It's easier said than done. This is a guy that is a handful to play against. He plays against top lines. He plays the power play and he plays the penalty kill -- and he's good at it. We do talk about it and monitor it. If you asked Alex he doesn't want to play any less, that's for sure." Of course, no player wants to see his ice time reduced. But the Canucks made a conscious decision in the off-season to overhaul their blueline and now have a deeper group of defensemen than at any time in Travis Green's tenure as head coach. It's up to the coaching staff to find ways to back Edler's time off a little and utilize the abilities of those around him a little more. As you'd expect, Edler feels he's up to the significant challenge of logging top minutes even at 33-years of age: "I feel good and I'm not going to complain about playing too much. I worked out all summer, I feel I'm in good shape and sometimes there are circumstances you can't control, so I'm just going to keep playing." Playing big minutes for the seventh time in 12 nights, Edler looked a little run down on Friday in Winnipeg. And you can understand why. Less might be more when it comes to his usage moving forward.

5) Bell MTS Place has been an absolute house of horrors for the Vancouver Canucks. And, really, the Jets have been the team's biggest nightmare when it comes to mismatches in terms of a single opponent. After Friday night, Winnipeg has now won nine straight games against the Canucks. The season series is one-sided. The scores in the games are generally that way, too. It was 4-1 on Friday. That continues a troubling trend for the Canucks who have now lost eight straight in the Manitoba capital and have been outscored 27-9 over that stretch. The last seven times as the visitors, the Canucks have not scored more than one goal -- and have been shutout twice. This is a warning: the Canucks return to Winnipeg on January 14th.