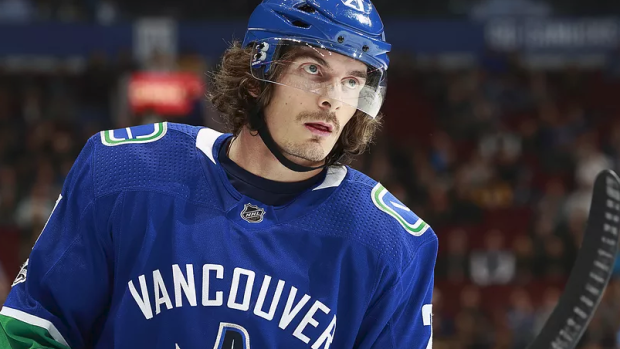 1) It's hard to know what to make of a 7-4 win over the worst team in hockey. The Canucks were full value for their 5-0 lead early in the third period and perhaps its human nature at that point to let up a little and allow the mind to drift to things like padding the personal statistics. Through the first 50 minutes of the hockey game, the Canucks had smothered the undermanned Senators dominating them on both the scoreboard and shot clock. But one lapse led to another and another -- and before they knew it, the Canucks were nursing a one-goal lead with 1:59 still to play. The bottom line is two teams with glaring defensive issues put them on full display on Wednesday night and as a result there were goals galore. The Canucks just managed to score a few more than their visitors.

2) It's spring break for many, but not for the guys on the Canucks power play. After a two month long break, the power play is back to work these days cashing in twice against the Senators. The Canucks have now scored five power play goals in their past five games. That equals their output from the 21 games prior to this torrid stretch. Bo Horvat scored on a deft deflection in the first period and, for the second time in a week, Brock Boeser looked the part of a sniper when he ripped a wrist shot past Anders Nilsson on a second period power play. Add in an Elias Pettersson PPG last week against New Jersey and the Canucks top players seem to have figured it out with the man-advantage. Pettersson leads the Canucks with 9 power play goals while Horvat has six and Boeser now has five. That trio has combined for 20 of the 37 power play goals the team has scored this season. In the past five games, the Canucks power play is 5/16 (31.3%). It's a huge reason the Canucks have won three straight for the first time since early December and are 4-0-1 in their last five. It's also worth noting that the Canucks are 4-1-1 in their last six on home ice as they rolled into a seven-game run at Rogers Arena.

3) Leave it to Loui Eriksson to light up the lowly Sens. Much-maligned for most of his three years in Vancouver, Eriksson had his biggest night in a Canucks uniform with a goal and three assists. That output matched his career-high accomplished on two other occasions but not since April 5, 2014 when a member of the Boston Bruins. He also had four points one night as a Dallas Star. Just four games removed from being a healthy scratch, the veteran winger set up both of Tanner Pearson's goals before adding an assist on Bo Horvat's second of the night to make it a 6-4 score. Moments later from just inside his own blueline, Eriksson sealed the deal with an empty netter that made the final 7-4. In the four game since being parked in the press box, Eriksson has 1+4=5. The 15:24 he logged on Wednesday was the most ice he's seen since February 2nd in Colorado in the Canucks first game after the All-Star break.

4) The seven goal outburst was the Canucks largest since scoring eight goals in an 8-5 win in Boston on November 8th. The only other time the team has scored seven goals this season was a 7-6 OT win over Colorado on November 2nd. With the seven on Wednesday, the Canucks went over the 200-goal mark and have now scored 202 on the season. With eight games remaining on their schedule, it certainly looks like they will get the 16 goals they need to match last year's total of 218.With Horvat scoring twice, he has joined Pettersson for the team lead with 27 on the season setting up a sprint to the finish for the team goal-scoring crown with both players well within striking distance of 30.

5) Wednesday's win moves the Canucks four points back of Arizona for the second wild card spot in the West. That's a fact. But so, too, is the reality that the hill remains remarkably steep for the Canucks to catch the Coyotes. Arizona holds a game in hand with time ticking on the season. At this time of year, the math becomes pretty simple. If Arizona goes 5-4 over its final nine games, the 'Yotes will finish with 88 points. The Canucks, now sitting on 74, would need to go 7-0-1 to collect the 15 points required to finish ahead of them. But it's not just Arizona they're chasing. Minnesota, Colorado and Chicago all sit between the Canucks and Arizona so even if the Coyotes stumble, one of those other teams is likely move past them in the standings leaving the Canucks chasing a handful of moving targets. Complicating matters is the fact that Arizona still has games remaining against each of those three teams ahead of the Canucks. The reality of today's NHL is that someone was is winning those games so points will be gained that will not benefit the Canucks. The bottom line is the Canucks need help, but for any of that to matter, they must help themselves first.