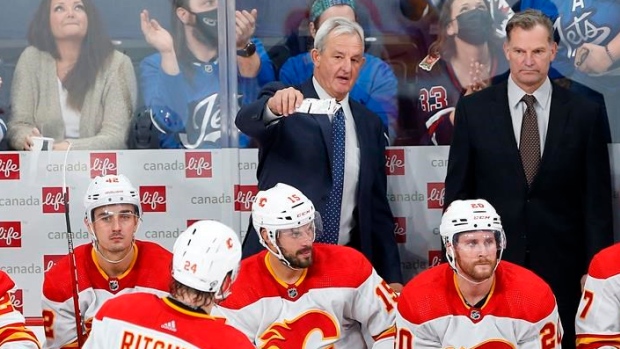 Call it a road trip of short-term pain for possible long-term gain.

After shocking much of the National Hockey League with an impressive 12-3-5 record to start the season, the Calgary Flames have now lost six of their past 10 games – including three straight during a recent swing through Florida and North Carolina.

But despite their recent defeats to upper-echelon teams in the Florida Panthers, Tampa Bay Lightning, and Carolina Hurricanes, Calgary remains in second place in the Pacific Division and might end up benefitting from the lessons they learned facing those Stanley Cup contenders.

The Flames were outscored 16-6 and allowed six goals in two of the three contests.

What did the Flames take away from those teams?

“It’s just pace of play,” he said. “Pace, execution, quickness. That’s not just moving your feet or skating. It’s how fast the puck moves…it’s passes, it’s moving up the ice as a five-man unit in all three zones. That’s one thing as a group that we learned. Even talking to the guys after playing those three teams, I was like, ‘The pace that those three teams play at, that’s a Stanley Cup Final type of pace.’ I’ve been fortunate enough to play at that level and at that pace. That’s a pace we need to get to.”

Goaltender Jacob Markstrom took responsibility for the team’s recent defensive woes. In the Flames’ five games since their COVID-19 outbreak, Markstrom and backup Dan Vladar have combined for a 3.40 goals-against average and .875 save percentage.

“For me, I’ve got to stop pucks,” Markstrom said. “That’s my one and only job. It doesn’t get simpler than that, to come up with timely saves and to help and communicate, talking to [defencemen].

“If a D goes back for the puck and you have a forechecker going a hundred miles an hour and wants to run them through the boards, it’s my job to let him know if [the play] is up the boards, or if it’s behind the net, or if he doesn’t have any support – just to communicate and help the guys and to make their job easier.”

Monday’s practice, one of their hardest of the season, was the first step in applying those lessons.

“We just wanted to do a lot of work in our own zone and a lot of work with our checking part of it in terms of our responsibility and angles and with our sticks,” head coach Darryl Sutter said.

“It’s something we didn’t work much on after the COVID breakout with our group, so it was important to get that back in again…our structure hasn’t been as sharp coming out of the break. Our team doesn’t have a lot of room for error, so it’s important that they do it right in practice and it carries over into games.”

Calgary plays just twice over the coming 12 days, giving the team ample practice time to return to the form that propelled them to being one of the league’s feel-good stories of the season. Calgary hosts Ottawa on Thursday before facing the Panthers again next Tuesday.