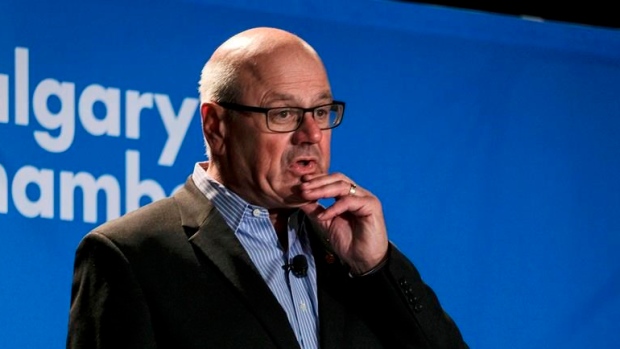 CALGARY — The president of the Calgary Flames says the team is not swimming in money.

Ken King told Calgary's chamber of commerce Monday that the team has gone from a giver to a taker in NHL revenue sharing.

"We've gone from a top-10 revenue contributing team, where we wrote the cheques in the last few years to help the other teams, and we have now crossed the line," King said. "We're now receivers. We'll get a cheque this year.

"Isn't that ridiculous in this beautiful market? It shows where this is heading and it's in the wrong direction.

"I can say sadly we have crossed one of the remedies off the list and that is the new facility. I honestly do not know where that part of the story is going to end."

Under NHL revenue sharing, the league's richest teams give up a portion of their revenue to help lower-grossing clubs pay players.

With the Oct. 16 civic election as a backdrop, the city and Calgary Sports and Entertainment have each gone public with what they are willing to pay and what they think the other side should pay for a new NHL building.

King declared earlier this month on behalf of Flames owners Murray Edwards, Alvin Libin, Clayton Riddell, Allan Markin and Jeff McCaig that they were halting negotiations with the city because talks were "spectacularly unproductive."

Their position is the team will continue to operate out of the 34-year-old Saddledome "for as long as we believe it is feasible."

While King declared during Monday's question-and-answer session "the file is closed" on more arena talk, he used his platform to talk about the economic challenges the Flames face in a Canadian market considered foolproof for an NHL team.

The Flames regularly sell out the Saddledome, which seats 19,289.

"When people are telling you 'this is a great market' and it is, it's a minimal market," he said. "It's on the margins when it comes to the number of people you need."

CSEC said they would have put $275 million of owners' money into a $500-million building and that the city should raise the remaining $225 million through a community revitalization levy.

A CRL allows the city to divert property taxes from new development that would theoretically spring up around a new arena into paying for it.

The city proposed a three-way split on the cost of a $555-million arena, with the city and the Flames each paying $185 million and the remaining third raised from a surcharge on tickets.

King insists the city's offer amounts to the team paying the entire cost, or more, because CSEC considers a ticket surcharge paid by users revenue that belongs to the team and because the city wants CSEC to pay property tax.

When asked Monday to explain how ticket surcharge revenue counts as Flames revenue towards arena costs, King said "I could, but I'm not going to."

The American finance magazine Forbes valuated the worth of the Flames franchise at US$410 million in 2016, which was 16th among its economic ranking of the 30 NHL teams.