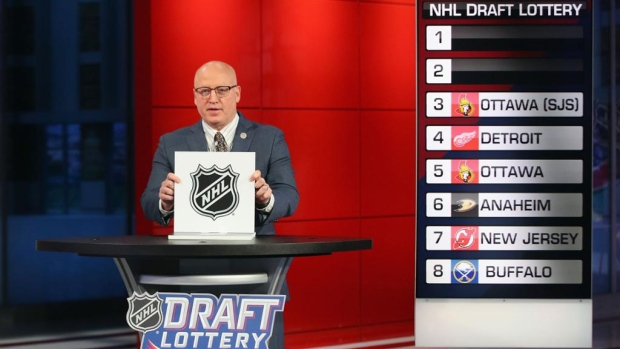 Detroit Red Wings general manager Steve Yzerman said he wasn't surprised with the outcome of last Friday’s NHL Draft Lottery, but surely there is some disappointment in a lost opportunity to secure the first-overall pick.

Yzerman has every right to be frustrated – his team finished last in the standings by a comfortable margin, and had the best single-team odds of selecting inside of the top three. The team, like most teams who finish 31st overall, is in desperate need of talent replenishment. But after all three lottery draws, the Red Wings were never called as a winner.

The end result? A team on pace for a 45-point season and a -141 goal differential will pick fourth overall. And while there will surely be a high-quality player available – perhaps Erie Otters defenceman Jamie Drysdale, or Saginaw Spirit centre Cole Perfetti – it doesn’t feel quite right.

It is also to be expected. There was a lot of consternation on social media about the construct of the lottery, and how it was unfair that any number of playoff teams may be able to snag the first-overall pick.

Privately, I’m sure the league is hoping it falls to one of the more deserving clubs, so to speak – teams like the Montreal Canadiens, Chicago Blackhawks and Arizona Coyotes hardly set the world on fire this year and would have inevitably been in the lottery at season’s end.

It also feels inevitable that at least one quality team – perhaps the Toronto Maple Leafs, Pittsburgh Penguins or Edmonton Oilers – could be upset in the play-in round and have a 12.5 per cent chance at consensus top prospect Alexis Lafreniere.

The league was also dealing with an unprecedented situation this year and had to get creative to save both the 2019-20 season and the longer-term economics. You might not like that type of creativity, but, on a one-off basis, something had to give.

What is of bigger concern is the framework of the draft lottery itself. The league instituted the draft to establish parity – the idea being that the league’s worst teams were the most deserving, and by extension deserved the first shot at a superstar player during the next draft.

But when teams realized that the quickest way to land a game-changing talent was to tank a season – remember what the Buffalo Sabres and Arizona Coyotes tried during the 2014-15 season? – the league reacted.

That reaction meant removing most of the incentive by flattening the lottery odds, taking away some balls from the league’s worst teams and distributing them to other non-playoff teams. 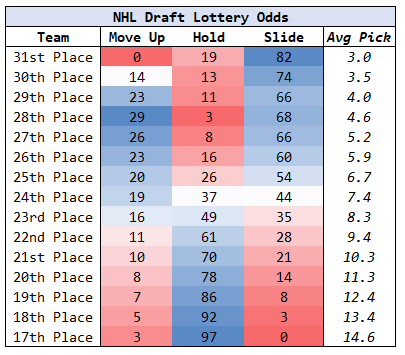 Whether or not you think this is equitable depends on how much you value the sanctity of the regular season and the draft lottery. I would guess that there is consensus that the league’s current structure – which includes the debatable merits of the draft itself, by the way – isn’t effectively accomplishing what the NHL intends.

There is one point that is important to consider, and it gets back to Yzerman’s comments. It’s not as if any one team in the “so-so” group – think teams finishing between 23nd and 17th in the league standings, or thereabouts – have a good shot on their own. But as a collective, they hold quite powerful odds.

In the current example, these teams (which tend to pace between 85 and 93 points per 82 games) have a one-in-five chance of winning the first draw, and a three-in-five chance of winning one of the first three draws. Said another way: it is more likely than not for a team within striking distance of the playoff cutline to win a top-three pick. Each individual team’s chances may be small, but as a group – a group that was generally competitive for most any regular season – they are quite powerful.

I don’t think the league will do something as draconian as eliminating the entry draft. But I do think there will be increased focus and attention to setups like the Gold Plan, which work to reward truly bad teams while ensuring a degree of competitiveness through the course of the regular season.

This is not an easy issue to tackle, but you do wonder if the league will consider some structural changes going forward.