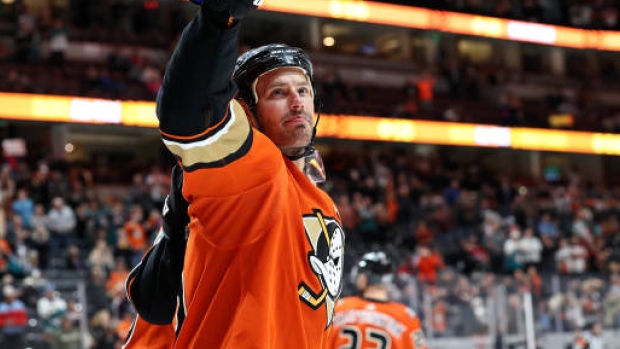 Two of the oldest forwards in the National Hockey League will mark milestone moments on Sunday. There will be a pre-game ceremony to honour Ducks captain Ryan Getzlaf for recently recording point No. 1,000.

"That's something you work towards your whole career," Getzlaf, 36, said. "It's been a nice little week and a half or two weeks of stuff. I'll be happy when it's passed and the whole ceremony is over, but it will be good for our fans."

"It's cool to be here for all these milestones that he's hitting," said rookie forward Trevor Zegras. "I feel like every other night we're doing a Getzlaf ceremony, which I know he hates, but it's pretty cool for all us young guys to see. We have a couple more coming up for him, which he'll be mortified about, but we'll definitely enjoy it."

On the other side tonight, Toronto's Jason Spezza, 38, will suit up in game No. 1,200. He is the second oldest forward in the league this season behind only Florida's Joe Thornton.

"He's someone that's adapted his game to stay in this league," Getzlaf noted. "That's been a big step for him."

Getzlaf took a page from Spezza's playbook this summer. He changed his stick, going to a model with more whip, in preparation for a different power-play role.

"I talked about Spezza and adapting earlier and that's the way I went into the summer," Getzlaf said. "The last couple years have been really weird ... whether they were going to use me, whether we were going to shift to all the kids and all that kind of stuff. I was on the second unit for a while. I was trying to figure out a way I could help our power play as well as stay on that first unit and that was my mindset."

Anaheim had the worst power play percentage in the NHL last year (8.9 per cent) but currently rank third in that category this season (28.1 per cent).

"Z was the guy they wanted to handle the puck on the half wall," Getzlaf said referring to Zegras. "He loves the puck in his hands. I felt my role could change a bit if I could get that one timer back that I used to take a lot in my younger years when we had Teemu [Selanne] and Andy [McDonald] on the other wall. That was a mindset heading into the summer. I took a lot of one timers, a lot of shots. It's a hard thing to shift your entire mindset, but I've been trying."

Getzlaf leads the Ducks with 14 power-play shots this season.

"I don't know if I'll really ever be comfortable with it," Getzlaf said. "It's still difficult at times to release the puck when I'm not really comfortable doing it, but it's been helping our power play. The results are there."

Getzlaf has 12 points this month. Per the Elias Sports Bureau, it is his highest single month point total since March 2018.

Head coach Dallas Eakins says his team is in the middle of an important "culture-building year" in their rebuild and Getzlaf is playing an important role.

"Leadership and leading our young guys and are veteran guys in the middle of the rebuild, you don't get better than this," the coach raved.

What has Zegras learned from Getzlaf?

"What haven't I learned from Getzlaf is probably a better way to say it," the 20-year-old quipped. "I just try and pick his brain on pretty much everything. Pretty special to be under his wing."

Zegras put on a show inside the Edmonton bubble at last year's World Juniors leading Team USA to the gold medal. Zegras was named MVP and earned a Twitter shout out from Auston Matthews.

"It was pretty cool," Zegras said. "A lot of us young U.S. guys look up to him and just to know he was watching and supporting us was cool at that time. Hopefully it will be a fun one tonight."

What does Zegras appreciate about Matthews?

"He's got a bit of swagger to his game," Zegras said. "A great American player and someone I love watching. A cool guy to look up to."

Matthews has scored in consecutive games on this California trip.

Zegras is also heating up with nine points in six games.

"He reminds me a lot of Patrick Kane and those kind of players that are unbelievable with the puck," Getzlaf said. "The more Trevor learns to play away from the puck, he's going to get better and better. He's doing a good job of adjusting his game to the pro level and understanding when it's appropriate to make certain plays and when it's appropriate to maybe dump the puck in, which he's not used to doing. He's getting better and better at that."

Asked a question about Matthews, Eakins quickly turns the focus to Morgan Rielly.

"I was part of the organization when we drafted Morgan," Eakins said. "He quietly goes about his business very, very well back there. He's a highly, highly underrated defenceman in this league.”

It's not often that a Leafs player is called "underrated." Why does Eakins feel that's the case?

"A little bit is his personality," he said of the soft-spoken Rielly. "There is a lot of focus on the forwards the Leafs have and it's easier to look at the shiny toys a little bit and those young men have earned everything they get there. They're excellent players."

"It's not just that I grew up as a coach as Morgan was coming in, it's I highly respect that young man's game," Eakins said.

Rookie Ducks defenceman Jamie Drysdale grew up in Toronto admiring Rielly. Does Eakins see any similarities between them?

"Jamie has some real quiet leadership that's being developed now," Eakins observed. "I think he's going to turn into an excellent leader moving forward. Morgan has done that really well, especially in a market like that."

Rielly is the longest-serving Leaf and never seems to get flustered by the ups and downs in Toronto.

"The amount of heat all the time is something you certainly have to learn to deal with, but it's not a deterrent," said Eakins. "It should inspire you. People care what you do and they're highly inspired by it ... They were losing a few games and they were ready to burn the city down and now everything's rainbows and butterflies."