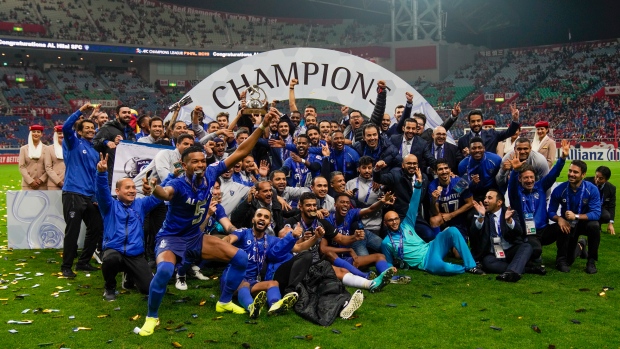 Coming into Sunday’s final with a 1-0 lead after the first leg on Nov. 10 in Riyadh, the Saudi Arabian giants knew they could win their first Asian Champions League title by holding Urawa scoreless.

Al-Dawsari all but settled the result when he took a pass from Sebastian Giovinco and right-footed a shot past Urawa goalkeeper Shusaku Nishikawa in the 74th minute.

Gomis sealed the win in the third minute of stoppage time with a right-footed shot from the centre of the box.

“This team was born from day one when started to work in our camp in Austria,” said Gomis, who led the tournament with 11 goals. “We have a lot of individual talent, but the collective part of the work is very important to bring this all together.”

Urawa, which also won the title in 2007 and 2017, was bidding to become the first three-time winner of the tournament.

Al Hilal became the first club from West Asia to win the title since Al Sadd’s victory in 2011 and they are the first team from Saudi Arabia to claim the trophy since the second of Al Ittihad’s back-to-back wins in 2005.

Urawa threatened only occasionally as Al Hilal’s well-organized defence held them at bay. Urawa coach Tsuyoshi Otsuki made several substitutions in the second half, bringing in Yosuke Kashiwagi, Kenyu Sugimoto and Yuki Abe but the home side was unable to break through.

Al Hilal lost in the final in both 2014 and 2017 but Razvan Lucescu’s side never looked like allowing anything similar to happen in front of a boisterous crowd of 58,109 at Saitama Stadium.