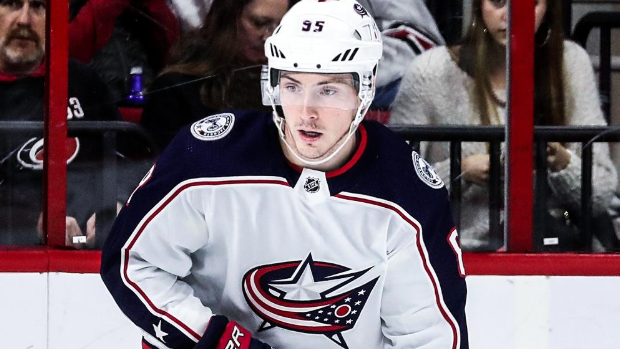 TSN Hockey Dreger reports that there will be no contract extension talks at this time with Duchene and the Blue Jackets, whose pending UFAs include Artemi Panarin and Sergei Bobrovsky, are loading up for the playoffs. "Lots of reasons to believe the Blue Jackets aren’t done loading up," Dreger tweeted shortly after the trade.

Duchene was in the lineup for Columbus when they faced the Senators in Ottawa Friday night, Dreger added.

Believe the full trade is: Abramov, Davidsson and a 1st RD pick for Duchene and Bergman. And a conditional 1st RD pick if Matt Duchene signs with Columbus

The 28-year-old Duchene has 27 goals and 58 points while playing in 50 games this season. He sat out the team's Thursday night loss to the New Jersey Devils along with fellow pending unrestricted free agents Mark Stone and Ryan Dzingel as the Senators protected their assets from injury.

Duchene carries a $6 million cap hit this season and TSN Hockey Insider Darren Dreger reported earlier this week he never got deep into extension talks with the Senators. Aaron Portzline of The Athletic reports he has recently changed his stance and would be willing to sign long-term in Columbus.

“Matt Duchene is an elite player in the National Hockey League and we are extremely excited to bring him to Columbus,” Blue Jackets general manager Jarmo Kekalainen said. “He is a tremendous skater, exceptional in the face-off circle and a proven goal scorer and point producer in our league.  We believe he is a tremendous fit for our team.”

Duchene was acquired by the Senators in November of 2017 from the Colorado Avalanche in a deal which saw Ottawa send Kyle Turris to the Nashville Predators and their 2019 first-round pick to Colorado. He scored 50 goals and posted 107 points in 118 games with the Senators, who currently sit last in the NHL.

"When we acquired Matt in November of 2017, we had hoped his addition would drive us to another deep playoff run," Senators general manager Pierre Dorion said in a team release. "Obviously that did not materialize; more than a year ago, we shifted our focus to a proper rebuild of the entire organization. Our desire was to have Matt be part of this and as such we approached him with a fair and comprehensive contract offer to remain a Senator for the long term.

"As soon as it was determined that he did not want to be part of our rebuild, we shifted our focus to see what assets we could acquire in exchange for Matt that would help grow our pipeline of potential. We feel that both Vitaly and Jonathan, along with the first-round pick will help enhance the team's future and fit with our continuing effort to build a younger, faster and stronger roster."

Duchene, who was selected in the first round (third overall) in the 2009 NHL Draft by the Avalanche, has 228 goals and 535 points in 704 career games.

Bergman, 23, has six assists in 33 games with the Belleville Senators this season. He was acquired from the San Jose Sharks last June as part of the trade that sent Mike Hoffman the other way.

He was drafted in the second round of the 2014 NHL Draft by the Sharks.

Abramov, 20, has 12 goals and 22 points in 52 games with the AHL's Cleveland Monsters this season. He was selected in the third round (65th) overall of the 2016 NHL Draft by the Blue Jackets.

Davidsson, 21, has 10 goals and 20 points in 35 games with Djurgardens IF in Sweden this season. The winger was selected in the sixth round (170th overall) in the 2017 NHL Draft.