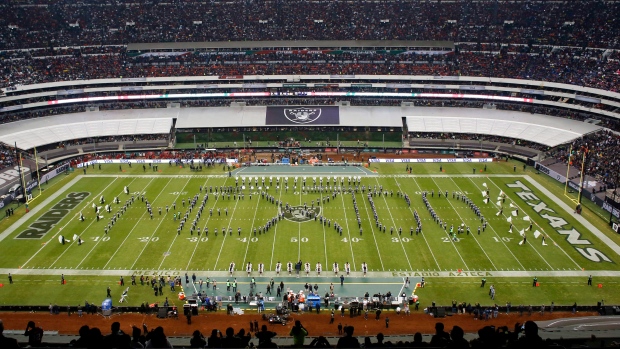 The Canadian Football League could be landing in Mexico next season.

According to TSN Football Reporter Farhan Lalji, there is a "very real possibility" that the CFL will play two regular season games there in 2019 and one of those games could be a summer date involving the Toronto Argonauts.

I’m told that there is a very real possibility the @cfl will play 2 regular season games in Mexico next season. And those wanting to bring the games there are convinced there will be 45-50k in attendance. @CFLonTSN @TSN_Sports

While no venue has been confirmed, Lalji adds that the groups trying to get games to Mexico - including the Liga de Football Americano Profesional - believe they could draw 40,000-50,000 fans in attendance.

“There is a lot of passion on both sides for the idea of a partnership between the CFL and LFA,” said CFL spokesperson Matt Maychak after the visit. “But there is no agreement in place and none has been reached. Lots of details remain to be worked out.”

Ambrosie’s trip to Mexico followed recent presentations to both the league’s presidents and board of governors about what he calls CFL 2.0, a vision for the league that includes “global” players from emerging football nations as part of the CFL, while Canadian players could be sent abroad for development opportunities.

The Mexican league, which consists of eight teams, will begin its fourth season in February, wrapping up with its championship game in May.

The NFL's Kansas City Chiefs and Los Angeles Rams will go head-to-head at Estadio Azteca in Mexico City on Nov. 19.