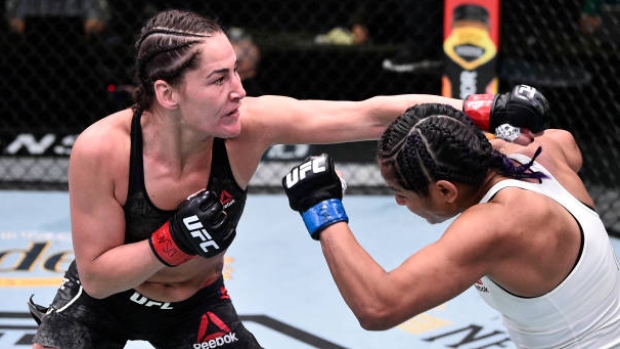 Prior to her last two fights, a victory over Viviane Araújo and most recently a short notice loss to Cynthia Calvillo, UFC flyweight contender Jessica Eye did something she hadn’t done in her entire time in the promotion - she missed weight.

The 34-year-old, who will face Joanne Calderwood this Saturday at UFC 257, came under heavy criticism for those problems with the scale, but it turns out there was a much bigger medical issue at play.

She credits searching for answers after her last scale miss and defeat for possibly saving her life and allowing her to turn her health situation around.

"Thank God I lost that fight because, me losing that fight means I get to be a better me because I had no idea what truly I was dealing with,” said Eye. “I think fighters are the biggest liars in the world, because we lie about pain all the time. Whether we’re in it or whether we feel it and I think I was lying to myself for many, many years about the things I was feeling. After this fight, it was so bad, the weight cut was absolutely terrible.”

As for the flack that Eye took for missing weight, she believes that she had earned the benefit of the doubt from other fighters and they need to do a better job of looking out for each other.

"That’s how disgusting we’ve treated each other as human beings,” said Eye. “Instead of asking someone that has a track record of making weight every time, nobody turned around, not fellow fighters, not anybody came up to me and said ‘Jessica, is something wrong, we’ve never seen you do that?’ So instead other fighters, I heard the way Paul Felder talked about me on the fight, how people said things about me. Nobody reached out to say, ‘Hey dude, maybe we can help you, is there something going on? Do you need a doctor?’”

After struggling through her last few training camps, Eye says with the failing gall bladder gone, she felt better than ever as she prepared to face Calderwood.

"I had a dead organ in my body. A dead organ,” said Eye. “People die from gall bladder cancer, people die from pancreatic cancer, people die from spleen issues, from an appendix bursting, I had a dead gall bladder. I was so fortunate that in that time my gall bladder did not explode or poison me any worse. Yeah, I feel like a new person, I feel energetic, I feel good now that I understand foods. I’ve been allergic to eggs and dairy my entire life, unfortunately the way that my dad was growing up, I never got tested for it.”

Eye and her opponent Calderwood had a heated back and forth exchange on Twitter after the weigh-in for the Calvillo bout, but the Ohio-born fighter does not agree that there is any residual bad blood heading into Saturday’s fight.

"To be honest, I didn’t really know there was any animosity, but I guess that’s what happens when you argue with people via social media,” said Eye. “I don’t really feel there’s a beef, if that’s what’s going to get her out of bed to come fight me then ok. How do you have [a] beef with another fighter when she never did anything to me? I don’t even know her.”

While the goal remains getting back to the top of the division and taking another crack at winning the flyweight title, for Eye, the health scare and recovery have added more perspective to what she does inside and outside the Octagon.

"Everything is different now, I’m different now, I’m excited to go back to weight cutting, I’m excited to do this,” said Eye. “Obviously, getting to the UFC gold is what every fighter wants and they’d be lying if they didn’t say that, but there’s levels to levelling. You have one level and then you continuously keep reaching each one and this first level of business was getting my health taken care of and my nutrition. Next is winning a fight and then from there, maintaining and going into the next fight. Obviously, I have some work to do and I’ve got time and health on my side, whatever we have to do to get me there, we’ll do.”