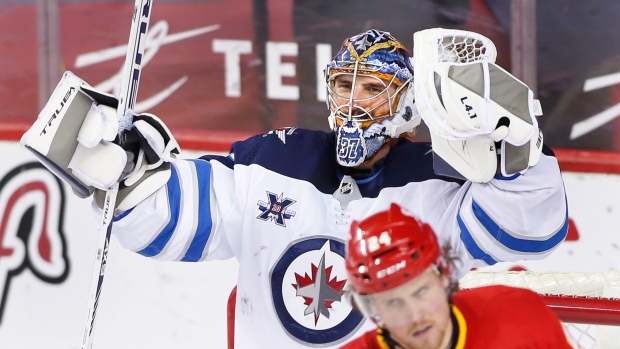 With grades in for the centres, wingers, and defencemen for each Canadian National Hockey League club, our attention now turns to the goaltenders.

The goaltending position in Canada has seen quite a bit of change over the past few seasons, and most teams – Winnipeg and Calgary excluded for the time being – should expect serious competition for ice time.

To the grades we go! 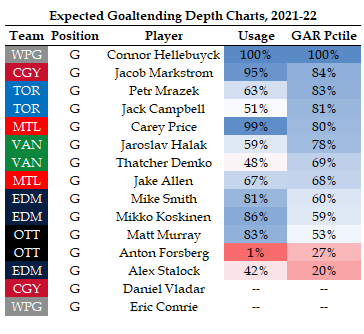 If you asked coaches and general managers who they though the best goaltender in the league is right now, the most popular answer would be Tampa Bay’s Andrei Vasilevskiy and deservedly so. Vasilevskiy is the ultra-talented backbone of the league’s most indomitable team.

But Connor Hellebuyck presents an interesting alternate. Hellebuyck in many ways is Vasilevskiy – he has an exceptional ability to read the run of play, is rarely out of position, and frequently turns dangerous rush and rebound opportunities from attackers aside.

The lone difference? The shot profile Hellebuyck faces is much more dangerous, in large part because he has a weaker team in front of him.

HockeyViz does a great job showing how goaltenders turn away shots relative to their peers, and even segments it out by shot type and location. If we look at Hellebuyck from last season, it’s more of the same from his career arc – regularly erasing goals from dangerous areas of the ice: 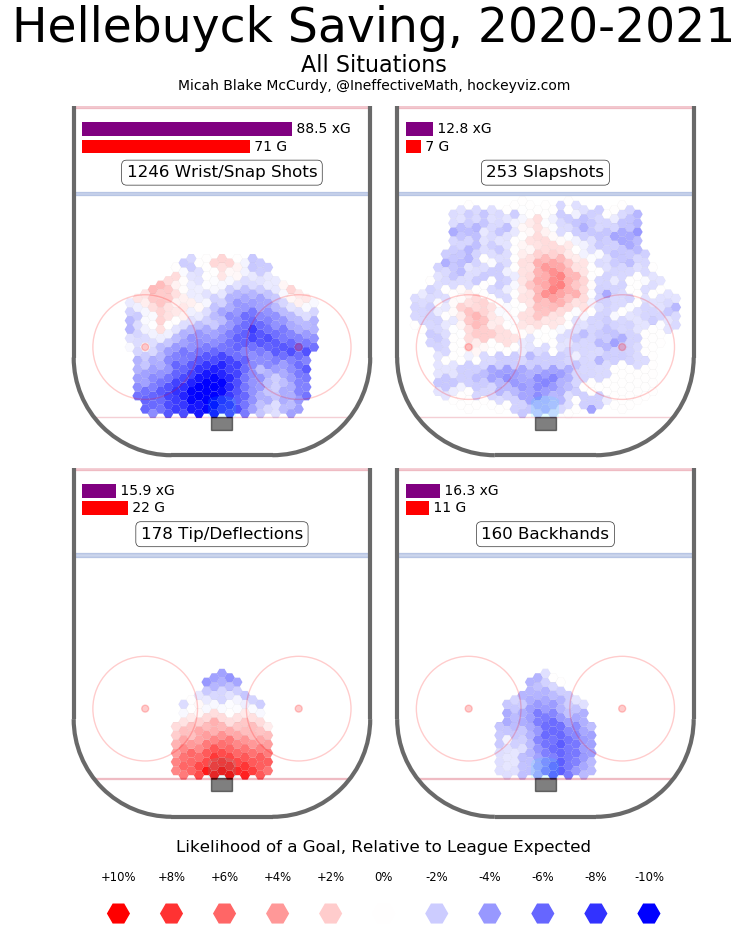 The Jets need little more than for backup Eric Comrie, or other internal options, to not get blown off the ice in their 20 or so starts. In every other matchup, Winnipeg will continue to carry a sizable goaltending advantage.

The question is whether the skaters can take advantage of having the league’s ultimate eraser behind them.

Fourteen years into his professional career, we may know less about goaltender Carey Price than ever before.

Price’s career peak was indisputably the four-year stretch from 2013-17, where Price routinely competed for the league’s best stop rate. During this stretch, Price won Olympic gold at Sochi, the Vezina Trophy, the Ted Lindsay Award, and, most notably, the Hart Memorial Trophy (2015).

Price hasn’t quite been the same calibre goaltender since that run. I attribute much of that to age and injury – the latter is of particular note, as Price enters training camp this fall on the mend from off-season knee surgery.

But every so often, Price shows he can roll back the clock. If not for a Herculean performance from Vasilevskiy in Tampa Bay, Price had an argument for best goaltender of the playoffs last season, with a 92.5 stop rate and seven goals saved against expectations.

We don’t know what the future holds for Price. The talent is indisputable, but at 34 years old, the Canadiens will always need a contingency option. That contingency option is Jake Allen – a well-paid rotation goaltender who was good enough in 29 games last year to inch Montreal into the playoffs.

Keep an eye on this tandem again this year. We haven’t seen Price cede this many starts to another goaltender since the 2015-16 season, where he was taken out of service by a knee injury.

But if the last few seasons are any indication, the Canadiens skater group cannot merely rely on this goaltending group to bail them out of grim defensive situations. Montreal’s team save percentage over the last three seasons is good for just 22nd in the league, and it’s one of the pressing reasons why they are always on the fringes of the playoff cutline.

There is little reason to be encouraged by what the Canucks have to offer on the blueline. Absent Quinn Hughes, there are too many high-risk players expected to play high-leverage minutes.

Stripping out the effects of goaltending, every Canucks blueliner was in the deep red on net expected goals last season, due in large part to the heavy shot volumes each group faced. From Jordie Benn (-0.45 per-60 minutes) to Jalen Chatfield (-1.26 per-60 minutes), it was all bad.

That’s why ensuring a reliable goaltending tandem was critical for the Canucks this season and importing the dependable Jaroslav Halak behind Thatcher Demko gives head coach Travis Green two quality options on any given night.

If you think the defensive concerns wash out any advantage Vancouver’s impressive group of forwards may have on the attack, then much of the Canucks’ postseason bid will come down to how well Demko can bail his team out of trouble when needed.

Demko absolutely was that goaltender last season – his 91.5 per cent stop rate was good for 11th in the league, and more encouragingly, Demko individually was able to erase nine goals from the ledger based on the danger of shots faced. And he faced a tremendous number of high-danger shots: 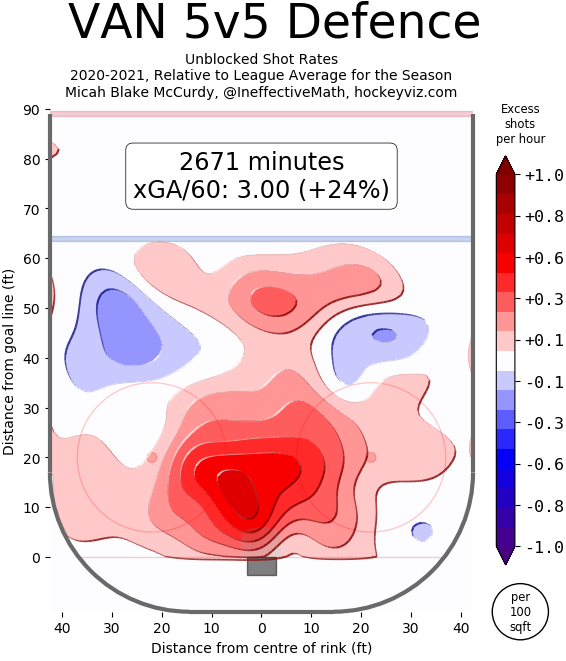 Demko is going to need to repeat that performance and then some this season.

Like the Canucks, the Maple Leafs have opted to counter the lack of a high-end No. 1 goaltender with a rotation between Jack Campbell and Petr Mrazek, two reliable starters who should compete for minutes all season.

It’s an interesting focus area for the Maple Leafs – less so whether the team will get quality goaltending, but if anyone will win the starting job outright during the regular season. Or, alternatively, who will be Sheldon Keefe’s choice when it matters come playoff time.

The goaltenders are similar in quality. Perhaps Keefe settles with the experience of Mrazek, fresh off a career year (92.3 per cent stop rate) with the Carolina Hurricanes. Or might we see Campbell earn a bigger slice of the net share next season after delivering for the Maple Leafs (92.1 per cent stop rate) last season?

One thing to consider: Campbell was the choice for Keefe last postseason, beating out Frederik Andersen for all seven starts. Andersen’s play had been in decline for some time, but that’s already one job Campbell has been able to win away.

With Rittich on his way to Nashville, the Flames are hoping for a big rebound season from Markstrom, who is signed through the 2025-26 season. The good news for both the Flames and Markstrom in particular is last year looks like a bit of an outlier on the low end – if we trend Markstrom’s stop rates over the course of his career, 2020-21 was an observable low: 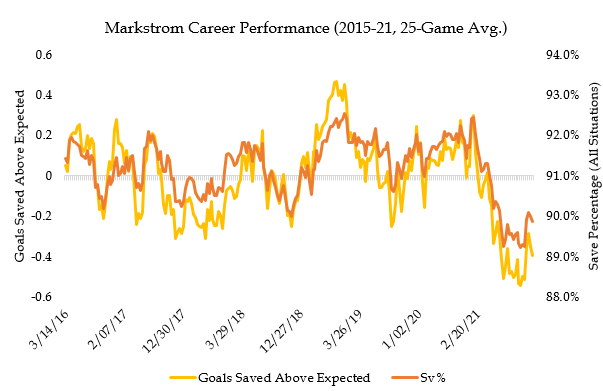 If nothing else, Markstrom seems a good candidate for a bounce-back season. If we assume last year was an albatross, the Flames should see about an 18-goal swing in goaltending performance.

By chance or design, much of Edmonton’s investment against the salary cap has been on the skater group. And while they have amassed one of the most impressive attacks in the league, it has come at the cost of confidence in the goaltending department.

The organization has tried to string along a Mikko Koskinen-Mike Smith tandem for some time now. As an insurance policy, the team previously claimed Alex Stalock from the Minnesota Wild.

It is a high-risk trio of goaltenders. Stalock is an established backup at this point in his career, Koskinen is coming off a season where he stopped less than 90 per cent of shots faced, and Mike Smith will turn 40 years old in March.

To Smith’s credit, age didn’t seem to act as an anchor on his play last season – the veteran turned in his best save percentage since the 2011-12 regular season, finishing fourth in Vezina Trophy voting.

But that age concern isn’t going away. If we look at the performance profile of goaltenders in this age range from 2007-21, we see distressing results. Keep in mind that the collection of goaltenders here generally made it this far in their career because their career arcs were so impressive – names like Martin Brodeur, Dwayne Roloson, Ryan Miller, and Tim Thomas fill this group up. That said, Father Time is still undefeated: 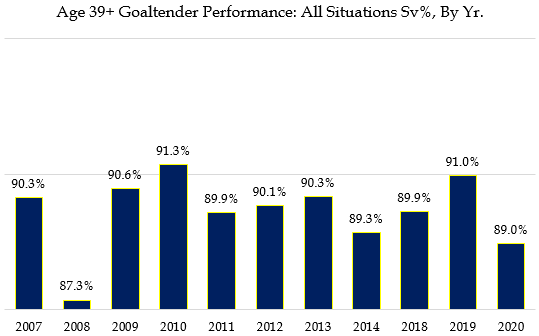 Perhaps Smith can sustain his play for one more year, or Koskinen can come off last season’s lows and deliver in spot starts for head coach Dave Tippett.

But there is no doubt that a disappointing Oilers season will likely correspond with disappointing play in net. The team has invited the risk at the position here, and historically speaking, the numbers are not on Edmonton’s side.

Anton Forsberg is a fine back-up goaltender, and the Senators have plenty of help in the developmental queue.

Filip Gustavsson is close to making the transition from AHL Belleville and looked great in spot starts last season with Ottawa. The Senators also have three prospects under the age of 21 – including Mads Sogaard, Kevin Mandolese, and Leevi Merilainen – behind Gustavsson. Ultimately, Ottawa just needs one of those lottery tickets to hit.

But the outlook for the upcoming season is more dire. Gustavsson is likely the starting goaltender with AHL Belleville, which means the Senators will be running a Matt Murray/Anton Forsberg tandem for most of the season.

And that’s probably the biggest risk area for a Senators team that is still very young and likely to be on the outside looking in come April of next season.

To successfully transition so many fledgling skaters to the league, the Senators knew they would have to insulate them with strong goaltending.

That’s why one of the first sizable investments Ottawa made during the rebuild was on Matt Murray, who signed a four-year, $25-million contract last season. But Murray has been a disappointment in Ottawa so far, and if the team had more redundancy in net last season, he likely would have played fewer minutes.

His career trajectory is alarming, and Ottawa buying after an ugly final season with the Pittsburgh Penguins hasn’t paid off. 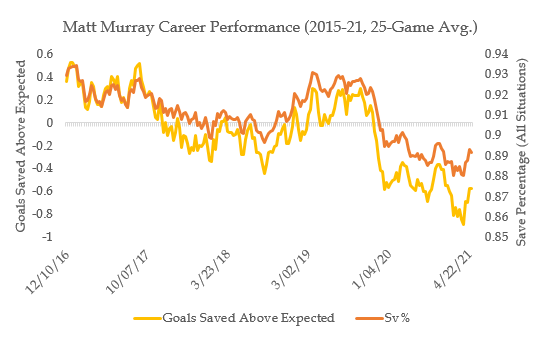 A poor start to this season from Murray, and we may see Gustavsson promoted much quicker than anticipated. This remains a high-risk position for Pierre Dorion and the Senators until further notice.