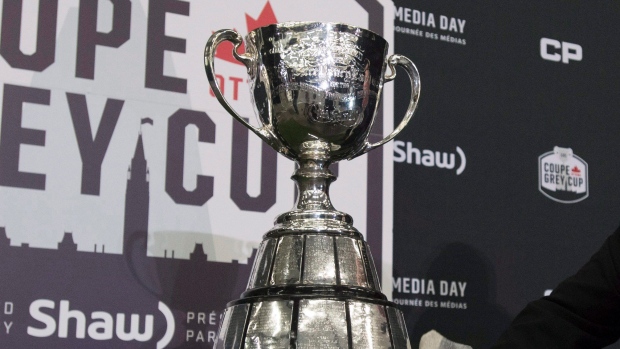 TORONTO — The Grey Cup has a new base.

The CFL announced Friday the trophy recently received a new base for just the third time in its 110-year history. That's because the base that's supported the original Grey Cup since 1987 ran out of room for the plaques that list the names of Grey Cup champions.

"This is our holy grail, a symbol of Canadian spirit and unity, as well as the trophy every Canadian Football League player wants to claim in victory," CFL commissioner Randy Ambrosie said in a statement. "We wanted any change to its appearance to be absolutely minimal as well as tasteful.

"We're thrilled with the final product."

The trophy, complete with its new base, will be front and centre Monday when Ambrosie tours media sites in Calgary, which will host this year's Grey Cup in November.

"The shape is the same and the cosmetic changes are very minor," he said.

The names of the Grey Cup champions on the new base remain mounted in vertical columns but they're now made up of individual plaques. The champions' names are darkened to make them easier to see.

Starting next year, a plaque from the past will be removed each year to make room for a new one honouring the newest champion. That means a plaque listing the name of the 2020 Grey Cup champions will replace the 1909 plaque.

The plaques that are removed will remain on permanent display at the Hall of Fame. As well, the entire barrel-shaped base that's been used since 1987 will also remain on display, attached to a replica of the original chalice.