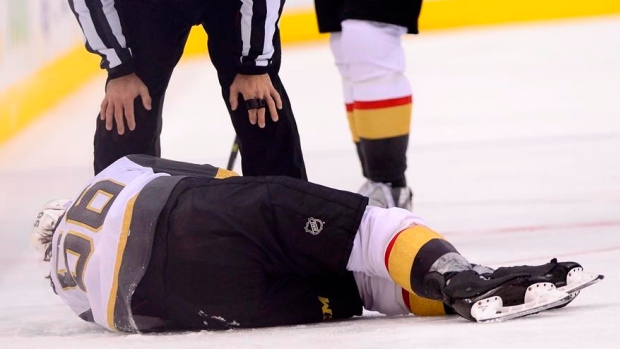 OTTAWA — The Vegas Golden Knights are still waiting word on the full extent of Erik Haula's injury, saying the Finnish centre will remain with the team but won't play in the remaining three games of their current road trip.

Haula was stretchered off the ice early in the third period of Tuesday's 3-1 loss in Toronto after taking a clean hit from Patrick Marleau as he backhanded the puck into the Maple Leafs' end.

Marleau finished the check and, as Haula hit the boards near centre ice, the Vegas forward's foot seemed to catch in the ice and his right leg buckled as he fell backwards. He clutched his knee in plain after hitting the ice.

Vegas (6-8-1) already has centre Paul Stastny (lower-body injury) on injured reserve. The team said in mid-October that Stastny, injured Oct. 8 in Buffalo, could be out for two months.

The 27-year-old Haula, filling in for Stastny, was playing on the second line with Max Pacioretty and Alex Tuch. Tuesday marked Pacioretty's return from an upper-body injury suffered Oct. 26 against the Tampa Bay Lightning. Tuch has also missed time through injury this season.

The Golden Knights play in Ottawa on Thursday and Montreal on Saturday before wrapping up their road trip Sunday in Boston.

In other news, suspended defenceman Nate Schmidt has rejoined the team for practice. He's eligible to return Nov. 18 in Edmonton.

Schmidt was banned 20 games for testing positive for a performance-enhancing drug.

The Knights also said defenceman Deryk Engelland, who missed the Toronto game due to his son's illness, will rejoin the team shortly.