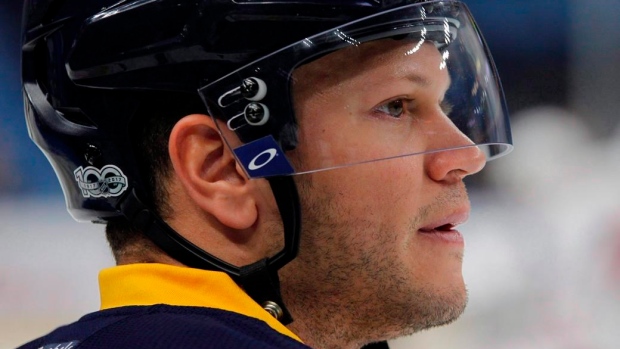 Saying he's not dwelling on the past, Okposo was eager to rejoin the Sabres after skating with numerous teammates for practice a little more than a week before the team opens training camp. Though he's has been skating for much of the summer, Tuesday marked his first time on the ice in Buffalo since being hospitalized late last season.

"It was obviously a tough situation, a tough road," Okposo said. "I'm just happy to be back and happy to be able to play again, and play at a high level."

He acknowledged questioning if he would ever get better before he started feeling "clear" in May.

"It was definitely a scary thing," Okposo said. "Your mind starts to question a lot of things."

In a letter posted on the Sabres website in July, Okposo wrote he began losing weight and had difficulty sleeping after what he described as "a routine hit" in practice. He played one game before the symptoms worsened.

Okposo then spent nearly a week in Buffalo General Hospital's Neuro Surgical ICU to be stabilized in April.

The 29-year-old from St. Paul, Minnesota, had 19 goals and 26 assists for 45 points in 65 games during his first season with Buffalo. Okposo signed a $42 million, seven-year contract with the Sabres in free agency last year.