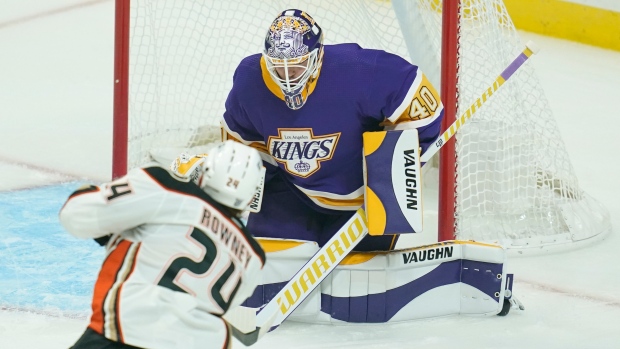 LOS ANGELES — Danton Heinen and David Backes scored, and the Anaheim Ducks snapped a three-game losing streak with a 3-1 victory over the Los Angeles Kings on Tuesday night in their first Freeway Faceoff of the season.

John Gibson made 20 saves and Nicolas Deslauriers had an assist before scoring an empty-net goal for the Ducks, who got their fourth victory of the year in the 152nd edition of this Southern California rivalry.

“No matter what the shots are or the chances are, it always seems like the games with us and them are tight,” Anaheim coach Dallas Eakins said. “I thought we were on point with everything we wanted to accomplish. We’d still like to score more goals. The chances are there. We’ve got to put them in the net."

Arthur Kaliyev scored in the 19-year-old’s NHL debut for the Kings, who have lost two straight. Cal Petersen stopped 40 shots in a strong performance for Los Angeles, but his teammates largely weren't sharp.

“They were better than us in every aspect of the game,” Kings coach Todd MacLellan said. “We didn’t have the puck much off faceoffs. We didn’t handle a heavy forecheck. We didn’t create a forecheck on our own. We didn’t sustain any offensive zone time at all."

One year and one day after the last matchup between these local rivals, they picked up right where they left off with a fight between Kurtis MacDermid and Deslauriers off the opening faceoff.

Nearly 59 minutes later, Deslauriers completed his Gordie Howe hat trick with his third goal of the season, tying for the team lead.

Heinen's third goal highlighted a dominant opening period by the Ducks. Backes put them up 2-0 in the opening minute of the second period with his first goal since Dec. 1, 2019, with Boston.

The 36-year-old Backes says he is revitalized after a rocky departure from the Bruins last year.

“Been through some tough times since last February, and to be in the lineup with a position to succeed, and having people like Dallas believe in me and breathe life into me, it’s huge,” Backes said. “I got back to the bench, and I said, ‘I forget how good it feels to score.’ ... It was a great template for us to follow to have success going forward.”

Kaliyev, the Kings’ second-round pick in the 2019 draft, knocked home a rebound of Michael Amadio’s shot in the second period for his first NHL goal. The Uzbekistan-born, Staten Island-raised prospect was promoted this week after playing a starring role for the U.S. team at the World Junior Championships.

“It was a really special moment, getting the first one,” Kaliyev said. “You never forget one of those moments. A lot of nerves at the start of the game, but I thought I tried to play my best out there.”

Kaliyev is the 20th player to score a goal in his Los Angeles debut.

The Kings visit Vegas on Friday. The Ducks host the San Jose Sharks on Friday.