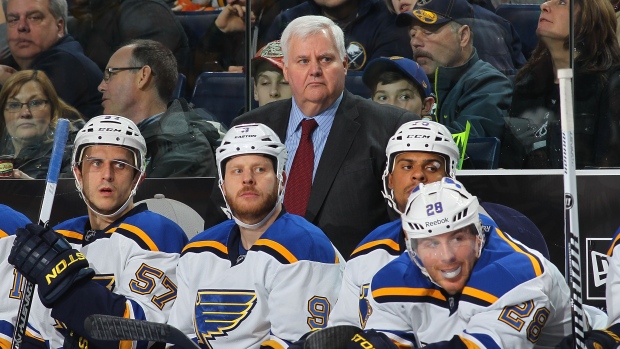 ST. LOUIS - After careful deliberation, the St. Louis Blues are sticking with veteran coach Ken Hitchcock for another season.

The Blues and Hitchcock on Tuesday announced a one-year contract. Financial terms were not disclosed.

Both Hitchcock and general manager Doug Armey referred to the term "detoxing" since the Blues were eliminated in the first round of the playoffs.

Instead of sweeping personnel changes, they promise increased commitment.

Armstrong said he wouldn't break up the core group that's been in place for several seasons, including captain David Backes, T.J. Oshie, Alex Pietrangelo and Patrik Berglund, just to make a change.

"There is value if we get better players in return," Armstrong said. "No trade is better than a poor trade. We're going to explore improving our team, but it has to make sense."

Heading the list of the off-season objectives is re-signing Vladimir Tarasenko, among the NHL goal-scoring leaders, to a long-term deal.

Hitchcock appeared glum at the news conference after the Blues were eliminated in six games by the Minnesota Wild. He was all smiles on Tuesday.

"The emotion when the series was over was 'Get me away from here,'" Hitchhcock said. "There was a time when you're not really sure, then it got over-ridden by passion to coach and teach."

Hitchcock said the half-ice game that works so well in the regular season won't work in the playoffs. He wants to see more "reckless" play.

"I really believe in the group, but I also believe if we don't make the internal changes that are necessary, we're going to get passed," Hitchcock said. "The four fastest teams in the NHL are playing right now.

"If Doug doesn't change anybody, we can do that."

Hitchcock took over as Blues coach during the 2011-2012 season. He has led St. Louis to an NHL-best 175-79-27 regular-season record since then. The post-season has been a different story.

Under Hitchcock, the Blues have made it past the first round of the playoffs just once in four tries, and never past the second. This season, they had the third-best record in franchise history (51-24-7, 109 points) but lost in the first round to lower-seeded Minnesota in six games.

The Blues were among several teams who met with Mike Babcock, the former Detroit coach, before he signed with Toronto for a reported $50 million over eight years.

Armstrong hesitated briefly before responding to a question whether he'd known all along that Hitchcock was the man he wanted.

"We got pulled into the wake of another boat," the GM said. "We were fine going down the river at our own pace. As uncomfortable as it was for fans to wait, it was the comfort level this organization needed."

Hitchcock, 63, is the NHL's fourth-winningest coach with a record of 708-429-185. He reached the 700-win milestone on March 12. He has the highest winning percentage of any Blues coach in the history of the franchise.

Hitchcock has coached in the NHL for 18 seasons with Dallas, Philadelphia, Columbus and St. Louis, making the post-season 13 times. He led Dallas to the 1999 Stanley Cup championship. He won the Jack Adams Award as the league's best coach in 2012.

He is second all-time in wins among Blues coaches with 175, trailing only Joel Quenneville, who had 307.

Despite his success, both general manager Doug Armstrong and Hitchcock were non-committal entering the off-season, leading to Armstrong's discussions with Babcock.

Armstrong said those talks, and Hitchcock signing a one-year contract, should have no effect on player performance.

"The reality is, this is Ken's third one-year deal," Armstrong said. "This is something we're comfortable with. I would be shocked if a player wants to flush a year of his career away because a coach is on a one-year deal."