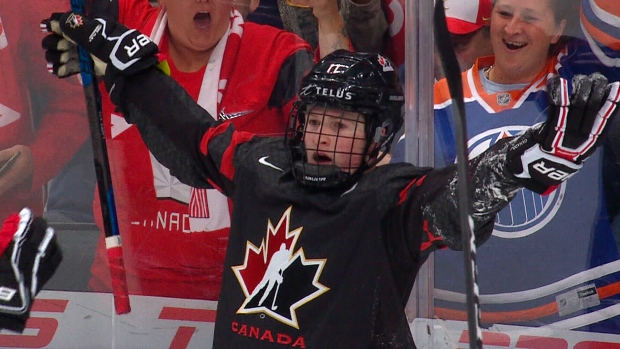 Rimouski Oceanic star Alexis Lafreniere was among the 34 players Hockey Canada named to its selection camp roster on Monday in preparation for the 2019 World Junior Hockey Championship in Vancouver and Victoria.

Lafreniere, who is considered to be the frontrunner to be the first-overall pick in the 2020 NHL draft, is the lone 2001-born player on the list. The Oceanic forward has 46 points (16 goals, 30 assists) in 28 games this season in the Quebec Major Junior Hockey League. He would be the first 17-year-old since Connor McDavid to make the World Juniors team.

There are 33 other players vying for the 23 final roster spots, which include two members of Canada’s gold-medal winning 2018 team in forwards Maxime Comtois and Alex Formenton. The selection camp will take place from Dec. 10-14 in Victoria, B.C.

Notably, Los Angeles Kings prospect Gabriel Vilardi who is on a conditioning stint in the AHL, is being loaned to Team Canada's selection camp. There are 16 NHL first-round picks on the preliminary roster.

Gabe Vilardi, the LA prospect currently on a conditioning stint in AHL, is expected to be amongst the 34 players named today, which means he’ll be loaned to Team CAN for the opening of camp, one week from today, in Victoria.

The roster also includes two 2019 draft-eligible players. Prince Albert Raiders forward Brett Leason has gone undrafted the last two years and is currently leading the WHL in scoring with 60 points in 27 games. Raphael Lavoie of the Halifax Mooseheads is also eligible for 2019 and has 29 points in 26 games in the QMJHL this season.

Notable exclusions from the list include forwards Robert Thomas and Michael Rasmussen, who are currently playing in the NHL with St. Louis and Detroit, respectively. Other omissions include two 2018 second-round picks in Oilers prospect Ryan McLeod and Panthers prospect Serron Noel, who were left off the list after participating in the World Junior Summer Showcase.

Robert Thomas (STL) and Michael Rasmussen (DET) will not be on the list of invited players today. It’s highly doubtful their NHL teams will loan them to Team CAN, but that option is available right up until NHL roster freeze on Dec. 19. https://t.co/Dr4JxOLABz

The final roster is expected to be named on Dec. 14. Team Canada will play three preliminary games from Dec. 19-23, and then begin its gold-medal defence against Denmark on Dec. 26 in Vancouver.

Here is the full roster: