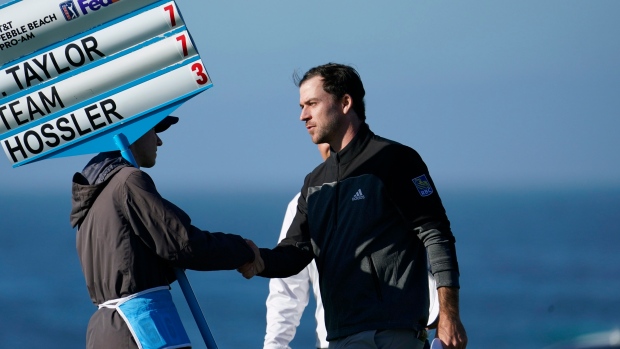 A round of golf is always better when you can start and finish in style. That’s what Nick Taylor did in the first round of the AT&T Pebble Beach Pro-Am, ending the day at the top of the leaderboard.

Taylor started on the 10th hole at Monterey Peninsula Golf Club and made an eagle on the par 5 after hitting a driver and 4-iron in close. He finished up with birdies on the eighth and ninth holes to post an 8-under 63, good for a two-shot lead.

“Playing 10, it's a gettable par-5 to start the day. So hit two great shots there about four feet, I made eagle, so it was a nice start,” said Taylor, who is playing this tournament for the sixth time. “And then I think I almost hit every fairway today, so I really had good numbers coming into a lot of greens, had chances, made some nice putts in the middle of my round to kind of keep it going and finished two great shots, a 5-iron and 3-iron on the last two holes to set up two birdies there.”

Those two shots left him five feet for birdie on the eighth, and then 18 feet for another one on the ninth.

Taylor added four more birdies during his bogey-free round, with the key to his day being his driver. The Abbotsford, B.C., product missed just a single fairway allowing him to attack the pins.

Even though the recent results may not show it, Taylor’s game has been solid this season with just a few bumps that have moved good rounds back into mediocre ones. He started the year with a top 10 at the Safeway Open and then added two top-30 finishes at the next two events.

“I've been playing solid all year, I've been driving it great,” said Taylor. “Again the putts fell today, which was nice.”

He’s has also been adjusting to playing golf as a new father. He and his wife Andie welcomed a son, Charlie, into the world in November and he’s been changing diapers and learning to deal with the middle-of-the-night feedings since.

Taylor is chasing his second PGA Tour victory, the first coming shortly after he turned pro in 2015. He admitted that winning early raised his expectations that more were on the way.

“I think winning so early might have jaded me for a little bit there,” said the 31-year-old, “but for sure there's been tournaments where I felt like I probably played better golf and didn't win than the week that I did. I think you need a few bounces here or there and putts lip in at the right time, making putts at key moments. When you get growing up watching Tiger you think that winning for some reason is easy, but it's just … the reality is it isn't.”