Button on if Avs can be stopped: 'It doesn't feel like it'

How do you plan for a team as talented as the Colorado Avalanche? That is the question we explored last week, concluding two points. The first: Most every team in the National Hockey League is ill-equipped to deal with the skill and depth of the Colorado roster. The second: Teams that have given Colorado trouble took their transitional offence and deadly power play out of the equation.

Again, that’s easier said than done – you not only need a bunch of very capable two-way players, but you also need a system that allows for more meaningful puck possession, and just as importantly, a slower pace of play in the neutral zone. We have seen in years past with teams like the St. Louis Blues (as recently as the second round) and the Vegas Golden Knights (last season) that taking away Colorado’s all-tempo-all-the-time style of hockey is the most viable path to winning.

So, what did we see in the first two games of the Stanley Cup Final? Unfortunately for Tampa Bay and their quest to three-peat, a lot of futility.

No one would be foolish enough to write off Jon Cooper’s team just yet, but the Lightning look slow and are turning the puck over way too frequently. Tampa has also been all too accommodating to that Colorado power play we talked about, perhaps the strongest statistical indicator we have as to whether a team can beat the Avalanche. After two road games, the Lightning have already conceded seven power-play opportunities and three power-play goals. That’s ugly, full stop.

That’s the big concern for Cooper as this series heads back to Tampa Bay on Monday night. You’re not going to win games when your goaltender is stopping 85 per cent of shots faced, which is what the Lightning have received from Andrei Vasilevskiy. But Vasilevskiy is the league’s most reliable goaltender, and this sort of underperformance is very rare. What’s more concerning is the overwhelmed Tampa Bay skaters.

If we break out all the matchups from the first two games, based on regular deployment, you can see the majority of Colorado’s lineup has bulldozed the opposition. It is the type of dominance that you tend to see in series that only manage to go four or five games.

For the purpose of this two-game study, we will look at head-to-head shot differentials. Tampa Bay has been out-attempted 105-71 (60 per cent Colorado advantage) at even strength over the first two games, and largely due to score effects, that’s the most flattering of numbers as to how the Lightning have played.

Let’s look at the data: 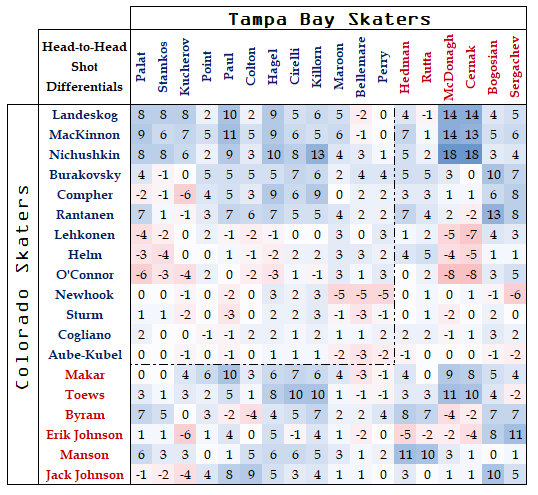 In retrospect, the word bulldozing might be an understatement. Save for some sparing minutes with Tampa Bay’s top line against Colorado’s checking line (Artturi Lehkonen and company), the Lightning are underwater everywhere.

The top of the lineup has seen the Nathan MacKinnon line obliterate the Nikita Kucherov line, and the Ryan McDonagh and Erik Cernak pairing – which looks painfully slow against Colorado’s speed on video – has been drowning in its matchup. I’d note this matchup gets even more lopsided when Colorado’s top pairing – featuring Cale Makar and Devon Toews – is backstopping the MacKinnon line.

It’s hard to win when you aren’t getting the goaltending, and it’s twice as hard if your best players are getting blown off the ice. But that’s not where it ends, because the Avs’ second line, featuring Mikko Rantanen, has won both of its matchups against Tampa Bay’s middle-six forwards – whether that’s the Brayden Point line or the Anthony Cirelli line.

At the end of the day, despite significant score effects hockey stemming from the Game 2 blowout, only two Colorado skaters – Logan O’Connor and Alex Newhook – are in the red for series shot differential. Look at expected goals, and that number drops to zero. Zero skaters have been territorially outplayed. Zero!

It’s not just that Colorado has looked this good. It’s that they look this good against a dynastic Tampa Bay team that has shown it can win in most every sort of matchup, and against a garden variety of opponent skill sets.

But two games in, the theory that Colorado would be Tampa Bay’s toughest matchup yet is strengthening. Even with the expected bounce-back of Vasilevskiy – and a rebound performance from this skater group on home ice in Game 3 – it’s hard to envision a path for the Lightning to win this year’s title.

Colorado looks that good. The video shows that level of dominance. The data is that scary. And unless the Lightning find a way to slow this group down, this series will be a short one.