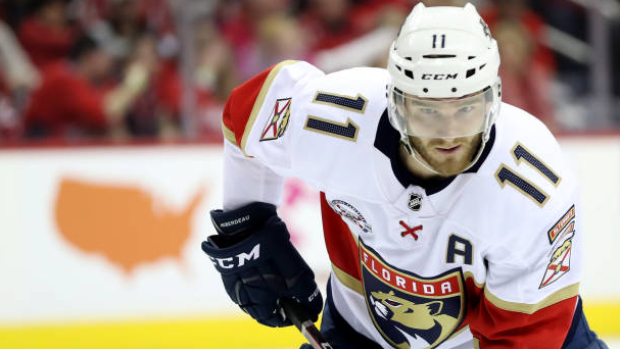 Florida Panthers forward Jonathan Huberdeau debuted on the TSN Trade Bait list at No. 20 on Monday, with TSN Senior Hockey Reporter Frank Seravalli speculating he "could potentially be a part" of the Panthers landing Sergei Bobrovsky and Artemi Panarin from the Columbus Blue Jackets.

Huberdeau has 13 goals this season and is on pace for career-highs in both assists and points with 39 helpers and 52 points through 55 games. The 25-year-old is in the second season of a six-year, $35.4 million contract with the Panthers and is without trade protection until July 1, when a full no-move clause kicks in.

He told The Athletic on Tuesday he wants to stay in Florida and said he's keeping his focus on the ice for the time being.

“It’s a rumour, we don’t know if it’s true. I’m just going to play here for now. We’re trying to make a push for the playoffs and I am going to do everything I can. We’ll see what happens.

“You can’t do anything about it, just play hockey. Just play the game.”

Huberdeau, 25, has spent his entire career with the Panthers since being drafted third overall in the 2011 NHL Draft. He carries a $5.9 million cap hit on his contract, equal with Aleksander Barkov for the highest among Panthers forwards.

The Panthers currently sit 11 points back of the Pittsburgh Penguins for the final wild-card spot in the Eastern Conference and forward Vincent Trocheck acknowledged trade rumours come with the territory when you're outside the playoff picture.

“One of his buddies saw it on TSN,” Trocheck said of Huberdeau, “and asked him, ‘Are you getting traded?’ That’s how he found out.

“I don’t think there is any truth behind it, but who knows? It doesn’t sound like he is worried about it. He’s going to keep playing his game. Jonny is a guy who goes with the flow of things. We’re going to get the same Jonny night in and night out no matter what is going on around him.

“When you’re a team in our situation, points-wise, and not in the playoffs but not at the bottom of things, you’re going to see those kinds of rumours. And, the type of players that we have … there’s nothing you can do about it. We’re just going out there trying to catch one of the playoff spots.”