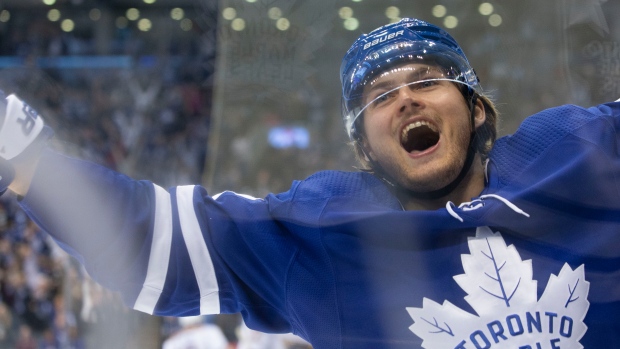 William Nylander scored his second goal of the season on Monday, in the Maple Leafs’ fourth game, achieving a feat it took 24 games to accomplish a season ago.

Back then, a protracted contract stalemate with the Leafs cost Nylander all of training camp, the preseason and two months of the regular season, leaving him a shell of the player Toronto thought it signed to a six-year, $45 million deal.

But that’s behind the winger now. Nylander has been a standout at both ends of the ice in the early days of Toronto’s season, and linemates Auston Matthews and Andreas Johnsson describe him as hungrier than ever before.

Head coach Mike Babcock, though, says the improvement is all relative to Nylander’s proper preparation.

“We’re talking about hunger, but he wasn’t here. So it was hard to be hungry [last year],” Babcock said after the Leafs’ practice on Wednesday. “And then when you get here and the league is going 900 [miles an hour] and you’re going 20, she’s tough. But the more he goes to get [the puck] with his speed, with his tenacity, with his stick lifts, with his contact in those traffic areas, the more he’s going to have the puck and the more dynamic he’ll be.”

Nylander is more succinct about what’s allowed his confidence to skyrocket.

“I feel the same way as last year in ways, but pucks are going in right now,” he said, smiling. “So that’s the difference. When you’re scoring it’s always fun. It gives you a little extra jump versus when it’s [not] like it did at the start of last season for me.”

Babcock tried reuniting Nylander on a line with Matthews and Johnsson when the Swedish winger rejoined the team last December, but it never clicked and he ended up in a bottom-six role after that.

Nylander has been back flanking those two since training camp began, which was right around the time Johnsson first sensed a shift in the 23-year-old.

“You feel like he’s hungry,” Johnsson said. “Especially when you play on the same line, you feel even more how the other players are playing, and right now he’s hungry and he’s chasing pucks and he’s aggressive. So it’s easy to play with him right now.”

That unit has been the most consistent for Toronto through four games, generating seven even-strength points among the three skaters (three goals for Matthews, a goal and two assists for Nylander and an assist for Johnsson). But after several missed opportunities against St. Louis, including on a couple hit posts, Matthews said the line is angling for more of a return on their chances.

“Some nights, nothing goes your way,” added Johnsson. “But we’re feeling positive from these games. We had the puck a lot in the offensive zone and we created chances and when you do that, it’s not really much to worry about. Just have the same mindset next game.”

Whether spending holidays together in Toronto or riding scooters around Scottsdale, Ariz., Matthews has built a tight friendship with former Leafs’ teammate Patrick Marleau.

So when the news came out Tuesday night that Marleau had signed a one-year, $700,000 contract with the San Jose Sharks, returning him to the club he played for from 1997-2017 before leaving to join Toronto for two seasons, Matthews immediately reached out to celebrate the good news.

“It was great to see that,” Matthews said. “I sent him a text. [I’m] happy for him, happy he can go home with his family and hopefully do well. I’m really happy for him.”

Nylander hadn't heard the news prior to media informing him about it Wednesday, but was equally excited.

"It’s incredible. That’s got to be lots of fun for his family to go back to San Jose," Nylander said. "Just the way he is as a pro, every day at the rink, practising, working hard, stuff like that. He taught us to become better pros."​

Marleau had one year remaining on his three-year deal with Toronto when the club traded him to Carolina last June, removing his $6.25 million cap hit from the books. Ultimately, Marleau wanted to follow his wife Christina and four sons back to the Bay Area, and accepted a buyout from the Hurricanes without any guarantee the Sharks would take him back.

That it all worked out for the 40-year-old in the end was all the Leafs had hoped for Marleau.

“That’s what he wanted. That’s what was best for his family,” Babcock said. “Probably took a little longer than he wanted, but he said last night his wife and his kids were real happy. Patty wants to keep playing past this year as well, so we wish him luck.”

Babcock said the Leafs never explored trying to re-sign Marleau for a lower price after the Hurricanes bought him out (“He didn’t want to play here. He wanted to play in San Jose, so that took us out of that mix,”) but said Marleau’s legacy is still felt throughout the Leafs’ room.

“John Tavares came here [because of Marleau],” Babcock said. “When you’ve got people that have come from other organizations like Patty did, that starts it. When Tavares is looking for someone to phone to find out whether he should come here or not and you have Patrick Marleau to phone, it’s a pretty good guy to phone. I thought he really helped out our young guys – gave us a real good pro and example of how to eat, how to work out, how to train, how to practise, so we could get on the process of changing the culture.”

As for whether Marleau can make good on his desire to keep playing after this season, which will be the Saskatchewan native’s 22nd, Babcock said it wouldn’t surprise him in the least.

“You look around the world, the average 40-year-old isn’t playing the National Hockey League,” he said. “You have to love the game and your family has to be committed to you loving the game because when you’re a pro athlete, it’s a lot about you. So, they have to make that commitment with you. They’ve all decided this is a good thing for Patty, and he’s a good player.”

More than a week into the regular season, Babcock hasn’t quite settled on a firm lineup for the Leafs just yet, and he’s going to continue rotating certain players until he does.

On Thursday against Tampa Bay, Babcock will keep Jason Spezza and Nic Petan on the fourth line and Justin Holl on the club’s third defensive pairing, but Nick Shore, Dmytro Timashov and Martin Marincin are still very much in the mix.

“They’ve had two [games] apiece,” explained Babcock. “One of the reasons we play eight exhibition games is it gives us a real fair chance to evaluate everyone else. So any way you look at it, guys have had quite a bit of [opportunity]. And not only do we want to be right, we want to give guys a fair chance and we think we’ve done that. Doesn’t mean it’ll be the same next game, but that’s what we’re doing.”

Babcock said the emergence of rookie defenceman Rasmus Sandin hasn’t factored into how he’s deciding whether Holl or Marincin will play in that pairing from game to game, but it’s encouraging that Sandin is finding ways to make an impact no matter who his partner is.

“He’s getting to play with good players,” Babcock said. “I think for him the more minutes he earns, the better opportunity is for him. Get comfortable with the size of the players. There will be a lot to handle there [against Tampa], no different than against St. Louis, but it’s like anything, it comes on an earned basis.”

That goes beyond just impressing Babcock to also catching the eye of assistant coach Dave Hakstol.

“The big thing is, Hak is running the backend, and if the coach is comfortable, you get out there,” Babcock said. “And if he’s uncomfortable, you don’t get out there; it’s just that simple. There’s a confidence when they’re watching [Sandin]. So if you make good plays, you keep going out. And if he starts getting nervous, you don’t go out as much. That’s just how simple it is.”