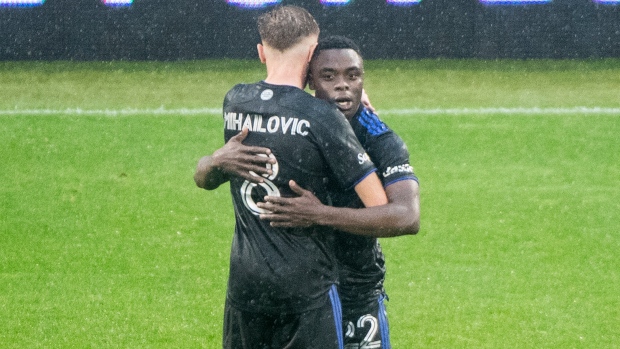 Mustafa Kizza's cross found the substitute’s head after Montreal spent the last 15 minutes of the match desperately pressing for the equalizer to keep them in the MLS playoff picture.

“I’m not surprised by this equalizer,” Montreal head coach Wilfried Nancy said. “My teams have always been resilient. It’s something I demand from everybody until the final minute.”

Matko Miljevic was Montreal's other goalscorer.

Kai Wagner scored for Philadelphia with Union's other strike an own-goal from Montreal goalkeeper James Pantemis.

Montreal gained a precious point in the Eastern Conference to move one point back of fourth-place Orlando and five back of Philadelphia ranked third, but let a chance at three points slip away Saturday.

“It feels like losing two points more so than earning one after the way we played,” Montreal captain Samuel Piette said.

“If we play this way for the rest of the season, then we’re going to be in a really good position.”

The top seven clubs in each conference advance to playoffs.

Montreal stormed out of the gate Saturday, enjoyed long stretches of possession and kept the ball deep in Philadelphia’s third of the field.

There were shouts for a penalty 11 minutes in when Montreal's Mathieu Choinère got by Olivier Mbaizo and was brought down in the box to the displeasure of the home fans.

“We were combining really well down the flanks so that let me get higher up the pitch,” said Choinière. “I play off of what I see, and I got the ball a lot when their defence would get sucked into the middle.”

The game opened up after that. Impact defender Rudy Camacho found himself all alone in front of the net two minutes later, but sent his shot high over the bar.

Rain soaked the pitch a half-hour into the match and sped the game up significantly.

Montreal took advantage of the increased tempo in the 33rd minute when Miljevic scored his first goal in his first MLS start by curling the ball into the bottom right corner.

“What I like about this team is that, in a big game and under pressure, they came ready to play,” Nancy said.

“We had good opportunities to finish and didn’t, but we had control of the game the whole way through. We should have killed the game early.”

Wet grass came back to haunt Montreal in the 63rd minute. Jamiro Moriento's free kick from 35 yards out skipped on the pitch, hit the post and rebounded off of the back of Pantemis to tie the game.

The slick field combined with a Philadelphia set piece hurt Montreal a second time in the 76th. Wagner’s low free kick from the side of the box skipped by Pantemis.

“This wasn’t a 15-minute stretch where we were unfocused or we switched off,” Piette said. “Those were just two balls in that were really challenging to stop, especially with the weather we had.”

Montreal's pressure for an equalizer paid off in the 95th minute, however.

Both teams have matches Wednesday when Montreal travels to Exploria Stadium to face Orlando City SC. Philadelphia takes on Minnesota United on the road.

Note to readers: REMOVES reference to "Impact" throughout story.