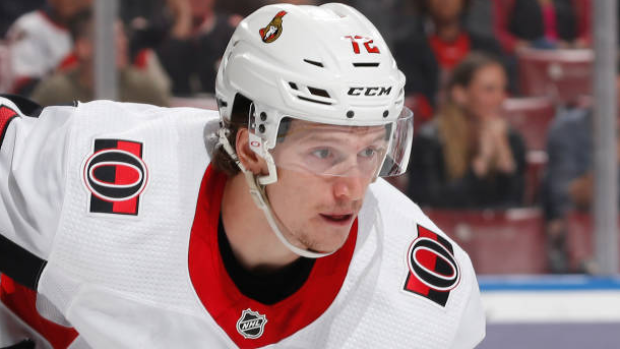 Marcus Hogberg will start in net Tuesday against the Oilers.

Head coach Sheldon Keefe said forward Alex Kerfoot is day-to-day after he did not take in the team portion of practice on Tuesday.

Sheldon Keefe says Alex Kerfoot is day-to-day, dealing with something similar to what Auston Matthews had dealt with. Will reassess him tomorrow to determine status for Thursday's game.

Kerfoot skated earlier in a grey sweater alongside injured forward Joe Thornton prior to the team practice.

Forward Nic Petan was added to the team's practice group for Tuesday's skate. Pierre Engvall took Kerfoot's spot at centre between Jimmy Vesey and Ilya Mikheyev on the third line:

Nick Petan has been added to #Leafs practice group for today.

Was interesting earlier that Alex Kerfoot was skating with Joe Thornton, while wearing a grey sweater, and headed off with him before the team skills portion began.

Defenceman Evan Bouchard, selected 10th overall by the Oilers in 2018, will make his season debut Tuesday night against the Ottawa Senators. The 21-year-old played in seven games with the Oilers in 2018-19, scoring a single goal, but didn't appear in any games last season.

Centre Nathan MacKinnon was absent from Tuesday's skate after exiting Sunday's overtime loss against the Minnesota Wild with a lower-body injury. After the skate, head coach Jared Bednar announced MacKinnon is week-to-week with the injury.

The Avalanche host the Wild on Tuesday night.

Laine, 22, was acquired on Jan. 23, but needed to quarantine due to COVID-19 protocols. He has two goals and one assist in one game this season with the Jets before missing time with an upper-body injury.

Laine skated with Alexandre Texier and Cam Atkinson during practice on Tuesday, but Tortorella hasn't said who he'll be playing with in his debut.

Patrik Laine skating with Alexandre Texier at center and Cam Atkinson at wing in morning skate.

Torts says he's not sure exactly what the lines are tonight, but that could be a start. #CBJ

Forward Alex DeBrincat and defenceman Nicolas Beaudin have been removed from the COVID-19 protocol list.

Forward Alex DeBrincat and defenseman Nicolas Beaudin have been removed from COVID-19 Protocol.#Blackhawks