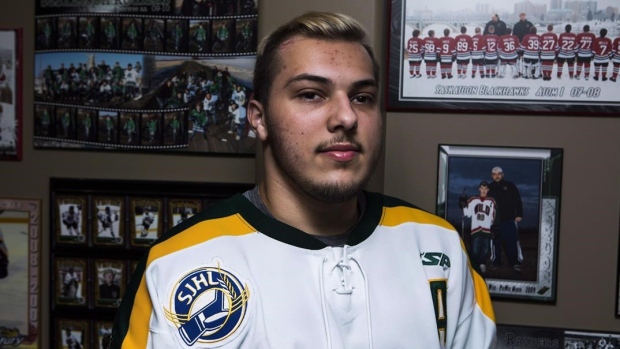 SASKATOON — One of the hockey players who was injured in the Humboldt Broncos bus crash is taking his first step to getting back on the ice.

Kaleb Dahlgren, 20, has committed to play for the Lions hockey team at York University in Toronto.

"My goal is to attend York in the fall of this year," he said Friday in a statement on Twitter. "However, the school has assured me I can begin whenever my body is ready."

Dahlgren has a lengthy recovery ahead after suffering a fractured skull, a puncture wound in his head, a brain injury and six broken vertebrae in his neck and back.

He was one of 13 players injured April 6 when the junior hockey team's bus and a semi-trailer collided in rural Saskatchewan. Sixteen people — including assistant coach Mark Cross — were killed.

Russ Herrington, head coach of the Lions men's hockey team, said Dahlgren has been on his radar since Cross recommended him last August.

"Kaleb is a remarkable young man who fits the type of character person we are recruiting here to York. He is a terrific student and very active in his community," said Herrington.

"Mark's recommendation and constant campaigning on Kaleb's behalf were a big reason why we had decided to make Kaleb an offer to become a Lion even before the accident.

"We are honoured that Kaleb has decided to follow in Mark's footsteps and become a Lion."

Dahlgren said it's been his goal since he was nine years old to play university or college hockey.

"Reaching this goal has always driven me on an off ice," he said. "However, it has taken on a new importance since April 6, 2018: to play hard and live life for my fellow teammates, for my coaches, including Mark Cross.

"I will honour their legacy in all I do as I carve my own path forward at York, on the ice and off."

— By Colette Derworiz in Edmonton.